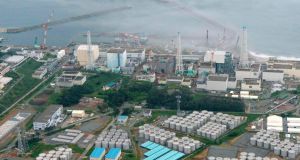 Japan’s nuclear crisis escalated to its worst level since a massive earthquake and tsunami crippled the Fukushima plant more than two years ago, with the country’s nuclear watchdog saying it feared more storage tanks were leaking contaminated water.

The UN’s International Atomic Energy Agency (IAEA) said today viewed the situation at Fukushima “seriously” and was ready to help if called upon, while nearby China said it was “shocked” to hear contaminated water was still leaking from the plant, and urged Japan to provide information “in a timely, thorough and accurate way”.

“We hope the Japanese side can earnestly take effective steps to put an end to the negative impact of the after-effects of the Fukushima nuclear accident,” China’s Foreign Ministry said in a statement faxed to Reuters in Beijing.

Japan’s Chief Cabinet Secretary Yoshihide Suga called the situation “deplorable”, and the Nuclear Regulation Authority (NRA) said it feared the disaster - the worst nuclear accident since Chernobyl a quarter of a century earlier - was “in some respects” beyond the plant operator’s ability to cope.

The plant’s operator, Tokyo Electric Power Co, or Tepco, has been criticised for its failure to prepare for the disaster and has since been accused of covering up the extent of the problems at the plant. After months of denial, Tepco recently admitted the plant was leaking contaminated water into the Pacific Ocean from trenches between the reactor buildings and the shoreline.

It said yesterday that contaminated water with dangerously high levels of radiation was leaking from a storage tank - the most serious problem in a series of recent mishaps, including power outages, contaminated workers and other leaks.

The NRA said it was worried about leakage from other similar tanks that were built hastily to store water washed over melted reactors at the station to keep them cool. Water in the latest leak is so contaminated that a person standing close to it for an hour would receive five times the annual recommended limit for nuclear workers.

A spokesman for the NRA said the agency plans to upgrade the severity of the crisis from a Level 1 “anomaly” to a Level 3 “serious incident” on an international scale for radiological releases.

An upgrade would be the first time Japan has issued a warning on the International Nuclear Event Scale (INES) since the three reactor meltdowns at Fukushima in March 2011. Explosions then led to a loss of power and cooling, triggering a maximum INES Level 7 at the plant.

NRA Chairman Shunichi Tanaka likened the stricken nuclear plant to a house of horrors at an amusement park.

“I don’t know if describing it this way is appropriate, but it’s like a haunted house and, as I’ve said, mishaps keep happening one after the other,” he told reporters. “We have to look into how we can reduce the risks and how to prevent it from becoming a fatal or serious incident.”

He said the NRA would consult with the IAEA about whether it was appropriate to assign a rating to the leakage at the plant.