India retaliates in US row over diplomatic arrest 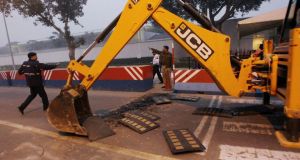 Indian police remove barricades that had been erected as a safety measure outside the main entrance of the US embassy. Photograph: AP Photo

India yesterday launched a series of reprisals against the United States over the recent arrest and strip-search of one of its diplomats in New York.

It cancelled identity cards of US consular officials issued by India’s foreign ministry and removed protective traffic barricades from around the US embassy in New Delhi in retaliation for the arrest of its deputy consul general, Devyani Khobragade, in New York last week over visa fraud allegations.

Officials said the withdrawn ID cards facilitate the speedy entry of diplomats to airports and other government facilities in India.

Diplomatic sources also indicated the Indian authorities were considering stopping all import clearances, including those of alcohol, for the US mission.

And, on Monday, miffed senior Indian officials including parliament speaker Meira Kumar and national security adviser Shivshankar Menon – both of them former diplomats – declined to meet a visiting US congressional delegation in Delhi.

The foreign ministry had summoned US

ambassador Nancy Powell on Friday to express its “shock” over the “unacceptable behaviour” in arresting Ms Khobragade, a move that has triggered widespread outrage across India.

Ms Khobragade was apprehended for allegedly underpaying her nanny and committing visa fraud to facilitate her entry into the US.

Indian officials say she was arrested as she dropped off her children to school, handcuffed in public and later strip- searched before being confined to a police lockup.

The 39-year-old Indian diplomat was also subjected to DNA swabbing but released some time later on a $250,000 (€182,000) bail bond after pleading not guilty to the charges against her and surrendering her passport.

She faces a maximum 15-year jail term if convicted on both counts.

India’s foreign minister Salman Khurshid yesterday said the government had “put in motion” measures to address the matter as Khobragade’s arrest while she was dropping her children to school was “completely unacceptable”.

“We have put in motion what we believe would be effective ways of addressing the issue and such steps that need to be taken to protect her dignity,” he said.

“We have expressed our deep distress and sense of disquiet that has been very, strongly felt in the strongest words possible,” he added.

Meanwhile, US state department deputy spokeswoman Marie Harf denied any wrongdoing by her country’s law-enforcement agencies. She said the state department’s security staff had followed standard operating procedures while arresting Ms Khobragade before handing her over to the custody of US marshals.

The US authorities claim Ms Khobragade had falsely stated in her Indian nanny’s visa application that her nanny would be paid $9.75 (€7.09) an hour, an amount in keeping with the minimum US wage rate, but in reality she was being paid a third of that amount.

This case is the latest concerning the alleged ill-treatment of domestic workers by Indian diplomats in the US and of paying them less than the authorised rate.

In 2012 India’s cultural and press counsellor in New York was ordered by the city’s court to pay $1.5 million (€1.09 million) in damages for forcing her underage Indian maid to work for little or no pay in their luxurious Manhattan apartment.

The maid was reportedly also threatened with dire consequences if she left home without permission.

A year earlier India’s consul general in New York was accused of maltreating his domestic help, underpaying her and forcing her to sleep in a storage cupboard.

US officials claim that under the Vienna convention on consular relations consular officials enjoy immunity from arrest only for crimes committed in connection with their work. India disagrees.