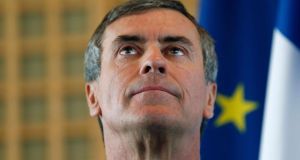 Jerome Cahuzac resigned from his post in charge of French state finances two weeks ago on the orders of president Francois Hollande. Yesterday he admitted to holding €600,000 in a secret foreign account and said on his blog he was "caught in a spiral of lies".

The scandal is a grave blow to the 10-month-old Socialist government as it struggles to fulfil election promises to improve France's economy and stem rising unemployment.

French prosecutors began investigating Mr Cahuzac for fraud after accusations by investigative news website Mediapart. If charged and found guilty in court, Mr Cahuzac could face up to five years in prison.

Geneva prosecutor Yves Bertossa acted on a French request to obtain documents from UBS and Reyl & Cie, the two banks involved, his office said in a statement.

It said Mr Cahuzac had had a Swiss account since 1992, but did not elaborate or specify whether he still held accounts at both banks.

By giving his consent for the bank to disclose information, French prosecutors will get sight of bank documents very soon, speeding up a process that might otherwise have taken weeks or months, the prosecutor's office said.

Mr Cahuzac said yesterday he had confirmed to investigating magistrates that an account existed although he had not deposited any money there for some 12 years. He said he had given instructions for the funds in it to be moved to his account in Paris.