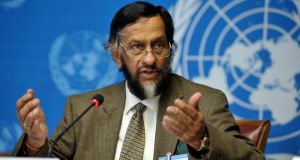 Indian Nobel Peace Prize laureate Rajendra Pachauri, who resigned this week as chairman of the UN’s Intergovernmental Panel on Climate Change after being accused of accused of sexually harassing a female employee at his Delhi-based think tank. Photograph: Martial Trezzini/EPA

The former head of the UN’s Intergovernmental Panel on Climate Change has been barred by a New Delhi court from leaving India, after being charged with sexually harassing a 29-year-old woman employee at his workplace.

Earlier this week, Rajendra K Pachauri, (74), a world-renowned environmentalist, resigned from the IPCC after a researcher at his Energy and Resources Institute in Delhi filed charges against him alleging continual harassing of her for over two years.

In 2007, former US vice president Al Gore and the IPCC wasere jointly awarded the Nobel Peace Prize for their role in galvanising international action against climate change.

Mr Gore, on a visiting to India this week, declined to comment on Mr Pachauri’s situation.

The 29-year old alleged victim, who cannot be named for legal reasons, gave the police hundreds of explicitly sexual messages that she said her boss, Mr Pachauri, had sent her. He denies the allegations against him.

Mr Pachauri has been admitted to a local hospital for cardiac treatment after developing hypertension and stress.

The former IPCC chief was scheduled to travel to Paris later in the year for the global conference on climate change, but is now almost certain not to attend. He also skipped an IPCC event in Nairobi earlier in the week.

The charges against Mr Pachauri have triggered outrage across India, where tens of thousands of women suffer harassment in their workplaces by male colleagues or superiors, or both.

Out of embarrassment and fear of social stigma, a majority of Indian women are loath to report this persecution.

But with increasing support from various media organisations and from female activist groups, a few are beginning to feel emboldened to name and shame their tormentors.