Diplomat may go to ombudsman over reports on Tokyo house 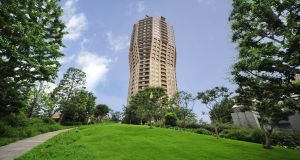 The Motoazabu Hills block in Azabu, Tokyo. Irish Ambassador to Japan Anne Barrington’s husband Ed Miliano said the residence in the block was his home address.

The Irish Ambassador to Japan has said she is considering complaining to the Press Ombudsman over media reports about her residence in Tokyo.

Ambassador Anne Barrington and her husband, Ed Miliano, an artist, said an article in the Irish Mail on Sunday falsely implied he used the residence for business. *

Mr Miliano said the residence was his home address in Tokyo but he rented a studio for work in the city.

The couple said the newspaper had violated Mr Miliano’s privacy and caused him stress and embarrassment. “While attacking civil servants may now be considered fair game, attacking their families crosses a line which is unacceptable,” said Ms Barrington. “We are considering our options on this.”

The article questioned the rent for the Ambassador’s residence, which is 5.1 million yen a month (about €45,000).

It boasts a 418sq m private living quarters, with two master bedrooms, two guest bedrooms, and a two-bedroom apartment for domestic staff. The rest is “representational space” for entertaining guests, including a large diningroom and kitchen.

The Irish Embassy said about 30 to 40 events are hosted annually at the residence. These events “are often in partnership with the State agencies to promote Ireland as an investment location, a tourism destination and an exporter of excellence”, it said in a statement.

Most hosting and entertaining, including a breakfast meeting this week for visiting Minister of State for Financial Service Eoghan Murphy, is done at the Azabu residence.

Rent for the residence is roughly within local market rates. The lease on the property commenced in 2002 and is due for review in 2017.

“It’s quite rare to find an apartment in Tokyo with a huge entertainment space,” said an Embassy spokesman. “In the rental market, we feel we have good value.”

While some property managers suggested the Embassy could have possibly negotiated a steeper cut, Ms Barrington insisted the real estate crash did not transfer to the rental market to the same extent.

Ms Barrington said the Embassy is looking for a compound that would integrate diplomats’ apartments with other Embassy functions. “We’re hoping to do it in such a way that it would become an asset to the State, and not leave us swinging in the wind when the rent changes,” she said.