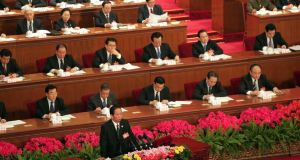 A court in China’s Sichuan province has handed down a suspended death sentence to a woman who killed her husband after months of domestic abuse.

The suspended sentence comes after the Supreme People’s Court in Beijing ordered an unprecedented retrial in the case last June.

Those sentenced to death are usually taken straight from the courtroom and executed, so if a death sentence is suspended for two years it usually means the person will not be executed, but the penalty is commuted to a life sentence.

The two-year reprieve is a way of imposing the death sentence without in fact carrying out the sentence.

Li Yan beat her husband Tan Yong to death with an air rifle in November 2010 in a high-profile case that earned much public sympathy.

She said her husband had threatened to shoot her with the rifle. She dismembered his body after the killing.

She testified that shortly after they married in 2009, Mr Tan began beating and kicking her. She alleged that he stubbed out cigarette butts on her face and chopped off part of one of her fingers.

She complained about the abuse to local police and community officials, but no action was taken.

Police investigated the case after a friend tipped them off.

The courts ruled that it was not enough to prove Li was a victim of domestic violence, and sentenced her to death in 2011.

“The reprieve for Li Yan could prove a landmark verdict for future cases where domestic violence is a mitigating factor. With her case, the highest court in China has sent a clear message that judges must not ignore domestic violence,” said William Nee, china researcher at Amnesty International.

Last week, police released on bail five women’s rights activists who were detained for 37 days for a campaign calling on the authorities to properly address domestic violence, after widespread international protests.

“The continued persecution of five young activists that campaign to prevent violence against women casts a dark shadow on this ruling,” said Mr Nee.

In March, the Supreme People’s Court and the government issued new guidelines on domestic violence cases, including recommendations on sentencing for victims of domestic violence who commit crimes against their abuser.

Fifty-five crimes are punishable by death in China. The state executed about 2,400 people in 2013 and probably executed about the same number last year, according to a report by the San Francisco-based rights group Dui Hua.

While the country executes more people every year than the rest of the world combined, since the Supreme People’s Court regained the power of final review of death sentences in 2007 it has executed a lot fewer people - up to 50 per cent less in some parts of the country.

According to the Supreme People’s Court monitor, reforms are in the works that would require all defendants in death penalty cases to be represented by a lawyer during the death penalty review process.

This is widely seen as a big step to strengthening individual rights protections in the criminal process in China.