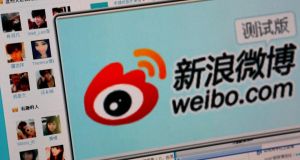 Xue Manzi has more than 12 million followers on Sina Weibo, the Chinese version of the banned Twitter. Photograph: Reuters

Police have detained Chinese-American venture capitalist Charles Xue, one of the country’s most popular celebrity bloggers, on suspicion that he visited a prostitute in Beijing, as authorities crack down on bloggers who have posted politically sensitive material online.

Better known by his alias Xue Manzi, the naturalised American citizen regularly reposts reform-minded content and shares his views on issues such as pollution and food safety.

Mr Xue has more than 12 million followers on Sina Weibo, the Chinese version of the banned Twitter. As soon as his detention was announced, Xue Manzi trended heavily on Weibo.

Most Chinese celebrities and tycoons have enormous followings on Sina Weibo and other social networks, and often use the platform to highlight rights abuses or criticise government policy.

This has prompted a backlash from the ruling Communist Party, which keeps a tight rein on traditional media such as TV, movies and newspapers, but finds it difficult to balance the need to control online content with the commercial opportunities offered by internet freedom.

There have been numerous arrests in recent days of bloggers who have criticised government officials for corruption or negligence.

A commentary in the People’s Daily, the official newspaper of the ruling Communist Party, said online celebrities had a lot of power and had “a civic responsibility to deliver more positive and constructive messages and promote virtue and trust”.

Even the Global Times newspaper, which is part of the same publishing house as the People’s Daily, seemed to make a link between a crackdown and Mr Xue’s arrest.

“Cannot rule out the possibility that authorities are arresting Xue Manzi with a prostitute to give him a hard time,” Global Times editor Hu Xijin wrote in a blog posting that later disappeared.