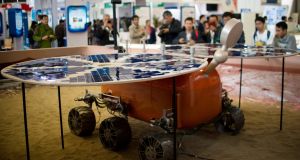 A model of an unmanned Mars vehicle, based on the Chinese lunar rover known as the “Yutu”, or Jade Rabbit. Photograph: Johannes Eisele/AFP/Getty

Chinese scientists have identified a new kind of rock on the moon. An unmanned Chinese lunar lander, launched in 2013, has explored an ancient flow of volcanic lava and identified mineral composition entirely unlike anything collected by the American astronauts between 1969 and 1972, or by the last Soviet lander in 1976.

The news, dispatched from an impact crater in the Mare Imbrium, is another reminder that planetary exploration is no longer the preserve of the Russians, the Americans or the European Space Agency: Japan, India and China have all launched lunar orbiters on their own rockets. Britain launched its own satellite, Prospero, on its own rocket, Black Arrow, from its own launch site in Woomera, Australia, in 1971 and then withdrew from the space race.

Since the end of the Apollo programme, US scientists have conducted their lunar research mostly from orbiters. Chang’e-3, China’s unmanned lunar mission, put down a rover called Yutu or “Jade Rabbit” on a comparatively young lava flow. This rover proceeded to identify a mineralogical mystery on the moon, a basalt with “unique compositional characteristics.”

The study, reported in Nature Communications, is expected to enhance readings from satellite instruments, and to throw new light on the origins of Earth’s nearest neighbour.

The Yutu rover’s instruments started examining lava that probably flowed about 3 billion years ago. What they found won’t keep ordinary citizens wide awake at night, but it is a surprise for planetary scientists. Geochemists can reconstruct a rock flow’s history from the telltale mix of minerals in the cooled lava. Basalts sampled by astronaut expeditions or collected by a Soviet Luna probe tended to be distinguished in two ways: either high in titanium, or low.

But the latest find reported from the first soft landing on the Moon in 40 years is both intermediate in titanium content and rich in iron oxide.

The mix of minerals in magma tells a story: that is because minerals in molten rock characteristically crystallise at different temperatures. So rock on the surface delivers clues to the deep interior of a planet.

“The variable titanium distribution on the lunar surface suggests that the Moon’s interior was not homogenised,” Prof Joliff said. “We’re still trying to figure out how this happened.”

Russian police arrest Navalny’s wife and ‘over 1,000’ supporters at nationwide rallies 15:40
Covid-19: Hong Kong locks down thousands for compulsory testing 14:40
Uproar in US after troops deployed for inauguration forced to sleep in car park 12:45
Italy tells TikTok to block users after death of 10-year-old girl 12:22
One year on: Wuhan is now a source of pride for China but many remain wary 10:30