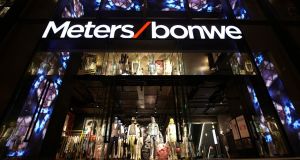 Metersbonwe has more than 4,000 shops in China between its two main brands, Me&City and Meters/bonwe

The Chinese government’s campaign against corruption has entered the arena of high fashion after billionaire Zhou Chengjian, founder and chairman of the clothing chain Metersbonwe, has gone missing since Thursday.

Mr Zhou (51) is believed to be involved in an investigation into insider trading and share manipulation.

According to Chinese media reports, police were questioning Mr Zhou about his links to fund manager Xu Xiang, known as “hedge fund brother No 1”, who was arrested in November for insider trading and stock manipulation.

Since then, the scope of the crackdown has widened to include the finance sector. Last year saw a host of Chinese bankers and finance chiefs suspended or “disappeared”.

There have been several senior figures caught up in corruption investigations, with particular focus on the financial services industry after last summer’s stock market crash wiped more than €4.5 trillion off the value of the markets.

Mr Zhou launched the business in Wenzhou, in the eastern province of Zhejiang, and media reports suggested he was back in his hometown at the time police detained him.

Metersbonwe has more than 4,000 shops in China and it has two main brands: Me&City and Meters/bonwe.

Trading in its shares, which are listed on the Shenzhen bourse, has been halted. The company said in a statement that this “in the interests of its shareholders”.

The corruption campaign is being felt in all sectors. Among those being investigated was Chen Hongqiao, president of the brokerage Guosen Securities.

Mr Hongqiao hanged himself in October after he was tied in to an investigation into the stock market regulator.