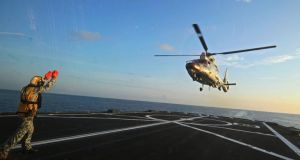 A Chinese military helicopter flies off the deck of Singapore’s navy missile frigate during a joint exercise by the Singaporean and Chinese navies in the South China Sea yesterday. Photograph: Then Chih Wey/Xinhua via AP

Amid ongoing regional tensions in the South China Sea, China’s cabinet, the State Council, has issued a policy document which expands the role of its navy and criticises as “provocative” those neighbours who take action over the reefs and islands to which it lays claim.

China has territorial disputes with nearly all its neighbours over claims in the South China Sea, including the Philippines, Vietnam, Malaysia, Taiwan and Brunei. It is engaged in land reclamation in the Spratly archipelago, over which Vietnam, Philippines and Taiwan all claim sovereignty.

News that China wants to continue to expand its navy to protect its maritime interests will do little to ease tensions with its neighbours. Online footage has shown Chinese building on the Fiery Cross Reef in the area, building what looks like an airstrip and facilities, which the US Navy calls the “Great Wall of Sand”.

Last week China slammed Washington after a US spy plane flew over areas near the Spratlys, with both sides accusing each other of stoking instability in the region.

Defence ministry spokesperson Yang Yujun described that incident as the US using “old tricks” to stir tensions and “smear the reputation of Chinese armed forces”.

It also underscored “the principles of defence, self-defence and post-emptive strikes”, adding that China “will not attack unless we are attacked, but we will surely counterattack if attacked,” Xinhua news agency reported.

The report reserved some choice words of criticism for Washington.

China has been critical of US efforts to increase its influence in Asia, especially the so-called “Asia Pivot”, which Beijing believes is aimed at undermining China’s growing power in the region.

“Some countries adopt pre-emptive strategies, emphasizing preventive intervention and taking initiative in attack. Ours is totally different,” said colonel Zhang Yuguo of the general staff department of the People’s Liberation Army, at a press conference on the white paper. “Being ‘active’ is only a kind of means and ‘defence’ is our fundamental purpose,” he said.