Weddings, fishing and scuba diving will all be available on islands in geopolitical hotspot 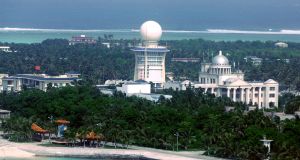 An aerial view of the city of Sansha on Woody Island in the disputed Paracel chain in the South China Sea. Weddings, sea plane trips, fishing and scuba-diving are all planned for the island. Photograph: AFP/GettyImages

China is planning to promote disputed islands in the South China Sea as a tourism destination, similar to the holiday paradise of the Maldives, a high-ranking cadre said, as tensions escalate over construction of military facilities on the islands.

“We will develop some islands and reefs to accommodate a select number of tourists,” Xiao Jie, mayor of China’s southernmost city, Sansha, told the China Daily newspaper.

Weddings, sea plane trips, fishing and scuba-diving are all on the cards for Sansha city, which was established in 2012 and is located on Woody Island in the Paracel archipelago, on the western fringes of the South China Sea where Vietnam and Taiwan also have claims.

“It will be an orderly and gradual procedure,” he said, adding that the sites opened to the public and tourists will be islands and reefs that do not need a military presence.

The South China Sea is one of the globe’s most contentious geopolitical hotspots, as China steps up its claim for a region through which about €4.5 trillion in seaborne trade passes every year. China is at odds with neighbours including Brunei, Malaysia, the Philippines, Taiwan and Vietnam over various territories in the region.

Cruise ships have been sailing from Sanya on the tropical island of Hainan to islands in the area since April 2013. There were 65 trips last year, with 16,000 passengers making the journey and about 30,000 visitors have gone in the past three years.

“It is not an easy trip, but many people with a patriotic spirit want to try it. They also want to have a taste of ocean life,” he said.

Flights to the island from Hainan would be available, and eventually there would be flights from Beijing.

“It is our dream that one day we can fly to the capital from Sansha. That will definitely be fulfilled,” he said.

The Permanent Court of Arbitration in The Hague is expected to rule soon on a unilateral arbitration case submitted by the Philippines on its territorial disputes with China in the South China Sea.

Mr Ma said the Philippines’s case against China was “worthless” and that the South China Sea islands have been part of China’s territory since ancient times.

“Before the 1970s, it was widely recognised by the international community that the South China Sea islands belong to China and no country ever challenged this,” Mr Ma said.