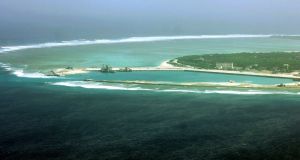 Part of the city of Sansha on the island of Yongxing, also known as Woody Island in the disputed Paracel chain. The chain has become the flashpoint in an increasingly aggressive territorial dispute between China and Vietnam, while Taiwan also claims the islands. Photograph: AFP/Getty Images

China’s People’s Liberation Army has deployed an advanced surface-to-air missile system on one of the disputed islands in the South China Sea, according to Taiwan and US officials, adding to growing tensions in the region about Beijing’s territorial ambitions.

Fox News initially released images showing two batteries of eight surface-to-air missile launchers, as well as a radar system on Woody Island, part of the Paracel Island chain in the South China Sea. The reports were subsequently confirmed by Taiwanese and US defence officials.

The Chinese defence ministry told Reuters in a statement that defence facilities on “relevant islands and reefs” had been in place for many years, adding that the latest reports about missile deployment were nothing but “hype”.

China claims 90 per cent of the 3.5 million sq km South China Sea, and its maritime ambitions have led to tensions with its neighbours, angry at what they see as Beijing’s militarisation of the region. Many neighbours have rival claims to sections of the maritime region, including Vietnam, Malaysia, Brunei, the Philippines and Taiwan.

The Paracel Island chain is a largely unpopulated archipelago administered by China for the past 40 years. It has become the flashpoint in an increasingly aggressive territorial dispute between China and Vietnam, while Taiwan also claims the islands.

The report used images from ImageSat International, a civilian agency. The images show an empty beach on February 3rd, but missiles are clearly visible on February 14th.

Last month, a US Navy destroyer sailed within 12 nautical miles of Triton Island in the Paracel chain, which it said was aimed at countering efforts by China, Vietnam and Taiwan to limit freedom of navigation. China condemned the US action as provocative.

Fox reported that the Pentagon confirmed the accuracy of the photographs. Bill Urban, a Pentagon spokesman, said: “While I cannot comment on matters related to intelligence, we do watch these matters very closely.”

A US official said the photographs appeared to show the HQ-9 air defence system, with a range of 200km, which would pose a threat to any planes, civilian or military, flying nearby.

China is also reportedly building a helicopter base at Duncan Island in the Paracel chain.

In 2014, there was a stand-off between China and Vietnam in the area after China’s Haiyang Shiyou 981 oil rig was drilling between the Paracels, and Vietnam said the vessel was within its 200-nautical mile exclusive economic zone and on its continental shelf, while Beijing insisted it was operating within its waters.

Earlier this week, Australian foreign minister Julie Bishop said she would seek clarification from Beijing about China’s construction of artificial islands in the South China Sea.

Chinese foreign ministry spokesman Hong Lei said China was entitled to deploy self-defence facilities on the islands, a right granted by international law, and criticised the Philippines for bringing the South China Sea dispute to a Hague tribunal.

“Australia should take an objective and fair stance on the South China Sea issue and refrain from actions that undermine regional peace and stability,” Mr Hong said.