Bodies of migrants on Malaysia-Thailand border show signs of torture

Police find more than 28 abandoned camps, some large enough to hold up to 300 bodies 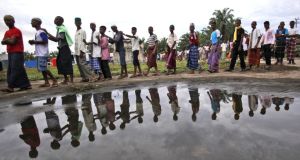 Rohingya migrants queue up for food at a temporary shelter in Bayeun, Aceh province, Indonesia. Since May 10, thousands of Bangladeshi and Rohingya migrants have landed ashore in Indonesia, Malaysia and Thailand. Thousands more are believed to be trapped at sea in boats abandoned by their captains. Photograph: AP Photo/Binsar Bakkara

Some of the bodies found in 139 graves in human trafficking camps on the Malaysia-Thailand border showed signs they were tortured before they were killed, Malaysia’s police chief said yesterday.

The Perlis area, which borders the Thai province of Songkhla, is dense jungle. This makes it difficult to police and easy for refugees to hide, but it also makes it easy for traffickers to prey on refugees and move them through networks of temporary camps.

“It’s a very sad scene . . . To us even one is serious, and we have found 139,” Malaysia’s inspector general of police Khalid Abu Bakar told reporters in the northern state of Perlis. “We are working closely with our counterparts in Thailand. We will find the people who did this.”

Footage showed bodies in plastic bags being lined up in a clearing in the forest.

Mr Khalid said it was unclear how many bodies were in each grave but that the work had begun to exhume the corpses. Some of the camps were so large they could have held up to 300 bodies. He said metal chains were found near some graves.

“We were shocked by the cruelty,” said Mr Khalid.

His operation began on May 11th and discovered camps and way stations used by smugglers along a 50km stretch of border.

Ammunition was also discovered, suggesting the gangs were armed.

“The body was only bones and little bit of clothing on it,” Rizani Che Ismail, officer in charge of Padang Besar police department, told Reuters, adding that the cause of death was not immediately apparent.

The gruesome discoveries on the Malaysian side follow similar uncovering of camps and mass graves on the Thai side of the border a few weeks ago, which caused regional uproar and prompted a crackdown by Thai authorities.

One of the grave sites discovered on the Malaysian side was just 100m from the site where 26 bodies were exhumed from a grave on the Thai side earlier this month.

Most of Burma’s 1.1 million Rohingya are stateless and face persecution by the country’s Buddhist majority.

They are brought by human smugglers through southern Thailand and held in camps along the Malaysian border, often until their families pay ransoms for their release.

The camps are also home to jobseekers from Bangladesh, looking for work in the region.

The situation at sea remains critical, and the United Nations refugee agency UNHCR estimated last week that 3,500 migrants were still stranded on rickety boats at sea and called for regional governments to do something.

Malaysia and Indonesia have said they will allow the thousands still at sea to come ashore temporarily and have ordered their navies to rescue people found adrift, while Thailand has said its navy will help those in medical need, although it will not allow migrant boats to land.

Investigations into who is behind the human trafficking seem to indicate a level of official complicity at a local level, with dozens of local police accused of involvement. (Additional reporting by Reuters)