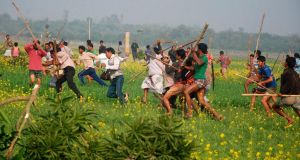 Bangladeshi opposition parties promised a new campaign of protest yesterday, hours after polls closed in a controversial and violence-hit general election in the unstable state, which has seen arson attacks on polling stations and an election officer beaten to death.

The Awami League, which has ruled since 2009 under the prime minister, Sheikh Hasina Wajed, was expected to win at least two-thirds of the 300 parliamentary seats in the poll, which has deepened divisions in any already polarised society. By 8pm local time they had won 141, with an allied party taking another 22.

Any hopes that the election would break the country’s political deadlock, which has led to the worst violence for decades, have faded with further clashes between opposition activists and security forces likely in coming weeks.

A boycott by the Bangladesh Nationalist Party (BNP), the main opposition in the poverty-stricken country of 150 million people, meant that results in more than half of the constituencies were decided before voting had even started. The BNP rejected the election yesterday and called a 48-hour general strike.

The election commission had not yet reported official turnout figures by 8pm local time yesterday. Opposition spokesmen said they feared ballot boxes would be stuffed to raise the total.

Officials in polling booths across Dhaka gave figures suggesting that the turnout in the city had averaged about 10 per cent.

“It’s my right to vote and I have voted for the Awami League before but this time I am very disappointed that there is no real competition,” said Humayun Kabir, as he arrived at a polling station in Mohakhali, Dhaka.

Eligible
Shamila Begum (55) was one of only 13 on a list of 511 eligible voters in a central Dhaka district who had cast their votes by early afternoon.

“There are no queues, nothing. What sort of election is this?” she said.

Yesterday’s poll brought months of strife to a bloody climax, with 19 people reported killed in unrest across the country. Most were identified as opposition activists and included some who died after police opened fire on demonstrators.

Hundreds of thousands of armed police, paramilitaries and troops were deployed to keep order during voting. In the 36 hours before the poll more than 120 schools where polling stations were to be set up suffered arson attacks.

Jamaat Islami (JI), the biggest Islamist organisation in Bangladesh and an ally of the BNP, said it would continue its campaign of protest unless its demands were met. JI was banned from the polls by a court order last year.

Shafiqur Rahman, assistant secretary of JI, called for “national resistance”.“A hartal [general strike] is not the only instrument. We have so many options . . . All strategies will be used. We hope for the sake of the country [that] the government will listen to the demands of the people,” he said.

Members of JI’s youth wing have been accused of hundreds of violent attacks on security forces, rivals, polling stations and ordinary people such as rickshaw drivers or tradesmen in recent months. Mr Rahman said the charges were unfounded and that all actions by party members were “according to democratic values and norms”.

Demands unchanged
The BNP decided to boycott the election when the government refused to hand over power to a neutral administration, as has been the practice since 1996. Officials said that their demands remained unchanged and called for fresh polls.

Many of the senior officials of the BNP have been imprisoned on charges of fomenting violence and hundreds of lower-level workers have been temporarily detained.

The Awami League said the BNP was “deliberately derailing democracy” and has refused a series of compromise offers, including ministerial posts. “We have done our best but in any country there is a limit to what any government or party can do if the opposition is hellbent on continuing the violence,” said Dipu Moni, a senior Awami League MP and former foreign minister.

Ms Moni, who was re-elected without contest, said that postponing the election was not an option.

“The government will continue to try to bring the opposition to the negotiating table but will not and cannot allow any anti-state activities. The BNP cannot hold the whole country hostage,” Ms Moni said.

Awami League officials now admit that the fresh elections will have to be held to obtain a “genuine mandate” but say that “rushing into new polls would be a mistake” as the country needed to be “stabilised and secured”.– (Guardian service)