Aid finally arrives for survivors almost a week after typhoon 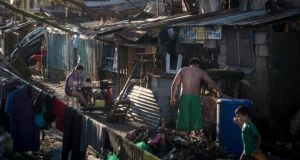 Survivors of the typhoon in Tacloban go about their daily lives amid the wreckage. The official death toll for for the city rose to 2,000 yesterday. Photograph: Sergey Ponomarev/New York Times

It was 4am and after hours on duty Brig Gen Salvador Mison jnr was losing his voice. The faint steel stripe across the horizon was the only hint of dawn, but loading up the C130 cargo plane early meant it could land at Tacloban in first light, maximising its trips. The previous day, a brief delay had caused the cancellation of one of only five relief deliveries from Cebu air base.

The flight’s manifest had just been torn up so fresh personnel could be deployed to the shattered city to maintain security and deliver aid.

“The men have been on the ground for three days with no food and no sleep. If they get sick they’re no help to anyone,” Brig Gen Mison said, running through the list of challenges.

“We hoped to have two Ospreys from the US yesterday; they’re not here yet. We have 160 people to get out of the city. Every person we have on board on the way in is one less piece of aid.”

There are well over half a million displaced people in the disaster zone, and many more affected by typhoon Haiyan.

A C130 can carry 25,000- 30,000lb (11-13 tonnes) in supplies, depending on passengers. The Philippines owns only three, and one was flying from Manila. Add in loading and flight times, and airstrips incapable of operating outside daylight, and the result was a desperate shortfall in relief.

“There are just too many requirements for food, water, medicine. We need more transport,” said Maj Gen Romeo Poquiz.

However less than 36 hours later, by yesterday morning, nine C130s stood on the runway along with the anticipated Ospreys, which have vertical take off and landing abilities that are valuable in such difficult conditions. Others were in the air, en route to Leyte and eastern Samar provinces, loaded with water, high energy biscuits, tins of sardines and sacks of rice. In another small step forward, they are able to land in Tacloban after darkness falls, too.

Crammed
The operations building was crammed thanks to the sudden arrival of international assistance en masse. Indonesia, Australia and Taiwan had sent cargo planes and crews. Israeli doctors were clambering on to buses that would drive them to Bogo in northern Cebu to set up a mobile hospital.

A Belgian team will focus on water purification and medical care; South Koreans have arrived in Tacloban to work on disinfection. The change was “enormous and heartwarming”, said Lt Col Butch Rivera, an air force spokesman.

The carrier’s 21 helicopters will help to transport emergency supplies to remote areas; its vessels have already ferried 1,920 gallons of water and three food pallets to Tacloban, with more supplies going to Guiuan, where Haiyan first landed.

The carrier group will be followed in about 10 days by Britain’s HMS Illustrious, with 900 crew and seven helicopters.

“You can see the devastation, the suffering and it’s quite clear that we are going to need long-term help for those people,” said British prime minister David Cameron, announcing the deployment.

Manila’s department of foreign affairs said international donors had so far pledged $90 million, including $28 million from Australia and $10 million from Japan, which will also send up to 1,000 troops.