Labourers, beggars and homeless make up majority of victims 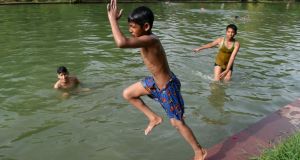 Indian children cool themselves off in New Delhi today. At least 800 people have died in a heatwave that has swept across India, melting roads in New Delhi as temperatures neared 50 degrees . Photograph: Money Sharma/AFP/Getty Images

Nearly 800 people have died in the heatwave that has swept India over the past few days, in which temperatures have risen 50 degrees in the eastern regions.

Labourers – forced to work at construction sites in the burning sun – as well as beggars and homeless people made up the majority of the victims.

Most of the deaths from heat stroke have taken place in the adjoining provinces of Andhra and Telengana in the south, where high levels of humidity worsen levels of stress and dehydration.

Officials said 551 people had died in Andhra, where temperatures climbed to 47 degrees yesterday and have not declined.

Neighbouring Telangana, reeling under similar temperatures, has registered some 200 fatalities.

Only a third of India’s 1.25 billion people have access to electricity and, of those who do, extra demand to operate fans and air conditioning is triggering power outages.

Thousands are flocking to air-conditioned malls, shops and restaurants across the country, leading to overcrowding and security problems.

New Delhi and the neighbouring states of Haryana and Rajasthan recorded temperatures of 45 degrees today, the highest for the month of May in over a decade.

“The hot and dry conditions are being made worse by winds blowing in from Pakistan’s Sindh province,” said BP Yadav, director of India’s metrological department. He warned the heatwave was likely to persist until the end of the week.

Roads in Delhi are melting and traffic jams, some lasting up to four hours, have become even worse than usual as stop signals have stopped functioning due to the heat.

Instances of road rage are proliferating resulting in law and order problems.

Thousands of households have also been without water for days, as there is no electricity to pump it out.

Large crowds gather outside power stations, threatening violence if their electricity is not restored, and in several instances, police have been summoned to disband protesters.

Smoke from diesel generators is further choking Delhi, the world’s most polluted city, while prices of vegetables, fruit and meat are rocketing.

“The heat is making life unbearable,” said Ram Pal, a gardener forced to spend his entire day outside. Even after dark there is no respite, as there is no electricity the entire night, he added.

India’s monsoon rains are expected to provide some relief, but are not expected to arrive in the north before early July, and June is normally the hottest month.

To make matters worse, there are predictions this year of a lighter monsoon due to the El Nino phenomenon, which causes global changes in temperature and rainfall. This, in turn could spawn a water crisis, as most reservoirs across India, dependent on the monsoon, are drying up.

The state authoritieshave advised people to stay indoors and drink plenty of water.