All face charges of involvement in the killing of protesters 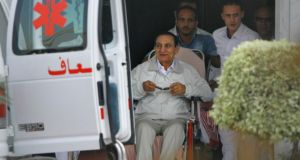 Former Egyptian President Hosni Mubarak, 85, is escorted by medical and security personnel into an ambulance to be taken by helicopter ambulance from Maadi Military Hospital to the Cairo Police Academy - turned - court in Cairo today.

With Egypt now under an army-installed government after last month’s overthrow of Islamist president Mohamed Morsi, local media seized on the symbolism of scheduling both sessions on the same day.

In the end, Mohamed Badie, the Brotherhood’s “General Guide”, and his deputies did not appear at the opening of their trial for security reasons, a judicial source said.

Citing their absence, the judge adjourned the proceedings until October 29th. The case against Badie, Khairat al-Shater and Rashad Bayoumy relates to unrest before the army removed Morsi on July 3rd.

Morsi has been detained in an undisclosed location since then.

More than 1,000 people, including about 100 soldiers and police, have died in violence across Egypt since Morsi’s fall, making it the bloodiest civil unrest in the republic’s 60-year history.

Brotherhood supporters say the toll is much higher.

Mubarak, who left prison on Thursday after judges ordered his release, appeared in a courtroom cage in a wheelchair, wearing sunglasses and dressed in white, along with his jailed sons Gamal and Alaa and former interior minister Habib al-Adly.

After a hearing that lasted about three hours, the judge set the next session for September 14th, pending further investigation.

The former president was sentenced to life in prison last year for complicity in the killing of protesters during the 2011 revolt against him, but an appeals court ordered a retrial.

A helicopter flew Mubarak to the court in the Police Academy on the eastern outskirts of Cairo from a military hospital where he was placed under house arrest after his release from jail.

The government used a state of emergency it declared earlier this month to place Mubarak under house arrest, apparently to forestall any public anger if he had simply walked free.

The trial of the Brotherhood leaders signals that Egypt’s new army-backed rulers intend to crush what they have portrayed as a violent, terrorist group bent on subverting the state.

The military contends it was responding to the people’s will, citing vast demonstrations at the time against the rule of a man criticised for accumulating excessive power, pushing a partisan Islamist agenda and mismanaging the economy. Agencies