ANC says protesters did their country a disservice 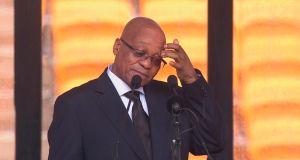 “Zuma’s humiliation” ran a screaming page-width headline in the Johannesburg Star’s main front page report of the state memorial service for Nelson Mandela which was marred by persistent booing of Mr Zuma, among others.

“Rain boo nation” the Times of Johannesburg proclaimed in a front page-wide headline that linked popular anger at the president with the inclement weather.

The Pretoria News was more nuanced, saying the US president Barack Obama stole the show, with Mr Zuma conspicuous by his absence.

News24, a popular online news service, reported last night that executives at the South African Broadcasting Corporation had directed journalists and technicians to edit out from film of the memorial instances of booing of Mr Zuma.

“Cut away! Cut away! Cut away!” sources said a senior editorial executive shouted in the station’s control room when cameras showed dignitaries disliked by the crowd. Eventually, a live TV link to large screens in the stadium went blank only to be revived after howling protests when Mr Obama spoke. His address was received rapturously and was the talk of Johannesburg yesterday.

In its first formal reaction, the ruling African National Congress said the protesters had done the country “a disservice”.