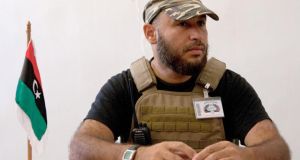 Mahdi Al Harati: the Irish-Libyan is reported to have been elected mayor of Tripoli. Photograph: Giulio Petrocco

Mr Harati, an Arabic teacher who lived in Ireland for some 20 years with his Irish-born wife and family, was chosen by the Libyan capital’s new municipal council, voted in on May 17th, according to the report. He had returned to Libya in 2011 to take part in the armed revolt that overthrew dictator Muammar Gadafy, and became commander of the Tripoli Revolutionary Brigade.

After the fall of Gadafy’s regime, Mr Harati became deputy military chief for Tripoli before travelling to Syria where he joined the uprising against President Bashar al-Assad.

He founded and commanded Liwa al-Umma, a rebel group made up of Syrians and foreigners, then made his way back to Libya in September 2012.