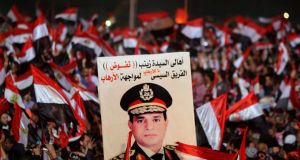 Egypt’s interim president has announced the country will have presidential elections before parliamentary polls.

The elections will be held before the end of April, with the parliamentary polls held before end of July, according to Egypt’s newly adopted constitution.

In a brief televised speech, interim president Adly Mansour said he will ask the election commission to open the door for presidential candidates to register as stipulated in the constitution.

Crowds gathered across the country yesterday in government-sponsored rallies marking the third anniversary of the start of Egypt’s 2011 revolution, with many openly calling for army chief General Abdel-Fattah el-Sissi to run for president.

The general has not yet made a formal announcement. He would have to quit his post as defence minister before launching a campaign.

Egyptian officials said the death toll from the clashes was now 49. Three soldiers also were killed in an attack in the lawless Sinai Peninsula.

“These terrorist attacks aim to break the will of Egyptians,” he said. “I tell those terrorists your despicable acts will not realize their goals.”

He vowed that the government will fight the violence “relentlessly” and “mercilessly.”

Mr Mansour also said he appealed to the prosecutors to review the cases of detainees held without charges from protests, including university students, to ensure that those held for no reasons are released. Thousands are believed to be locked up following an intense government crackdown on dissent.