Attack on Nigerian college leaves up to 50 students dead 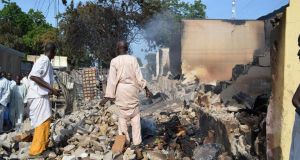 Suspected Islamic militants gunned down students as they slept and killed as many as 50 in an early-morning attack in north-east Nigeria, a college provost said.

Molima Idi Mato, of the Yobe state College of Agriculture in rural Gujba, said the gunmen also torched classrooms in the attack at about 1am .

The college is about 40km from the scene of similar school attacks around Damaturu town. He said security forces are still recovering bodies so he could not give an exact death toll. About 1,000 students have fled.

North-east Nigeria is in a military state of emergency against an Islamic uprising prosecuted by Boko Haram militants who have killed hundreds of civilians in their quest for an Islamic state.

Boko Haram killed 27 villagers in two attacks in the same region earlier this week, a government official said, as violence continued to flare in the face of an army crackdown on the militants.

Violence has intensified over the past two months, as the Islamists fight back against a military operation that President Goodluck Jonathan ordered in May to try to crush their four-year-old rebellion.

There was an initial lull in the violence when the military operation started in May and Islamists fled their bases in cities, forests and mountains across the northeast. But then the militants started revenge attacks, first on schools, seen as focuses of the Western culture they despise, then on the security forces and the civilians they believed were helping the army.

Several hundred people have died in attacks over the past few weeks. Some observers say the army offensive has only succeeded in pushing attacks away from well-guarded large towns and cities into vulnerable rural areas.

Thousands have been killed since Boko Haram launched its uprising against the state in 2009, turning itself from a clerical movement opposed to Western culture into an armed militia with growing links to al-Qaeda’s West African wing.