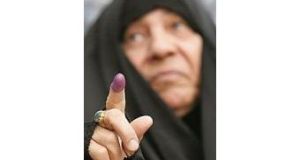 Counting of votes in Iraq's historic election began tonight, in many places by candlelight due to widespread power outages. President George W. Bush described the election as a "resounding success".

Speaking in a televised broadcast this evening Mr Bush said Iraqis had rejected the anti-democratic ideology of terrorists.

"By participating in free elections, the Iraqi people have firmly rejected the anti-democratic ideology of the terrorists. They have refused to be intimidated by thugs and assassins," he said

In the Shia stronghold of Najaf, six electoral officials sat on the floor of a classroom at Akkadh middle school unfolding ballot papers as candles flickered in the gloom. They sorted the ballots into neat piles, while two observers from competing parties watched over them.

There were no independent Iraqi monitors to view the Najaf count, let alone international observers, but the school's voting coordinator said everything was being done by the book.

The Electoral Commission in Baghdad, which organised the election, has said it could take 10 days to tally final results in Iraq's historic poll, including voting by Iraqis abroad. But the likely outcome of the country's first multi-party election in 50 years should be apparent within days, analysts say, predicting a victory for Iraq's long-oppressed Shias

During the day insurgents killed 35 people in a bloody assault on the poll despite draconian security measures imposed by Iraq's US-backed interim government.

The insurgents struck mainly in Baghdad, rocking the capital with nine suicide blasts in rapid succession, killing at least 27 people. Interim Interior Minister Mr Falab al-Naqib said suicide bombings were carried out by a Syrian and a Chechen.. The deadliest attack was when a man with explosives strapped to his body blew himself up in the queue at a polling station in east Baghdad, killing six people.

The Iraqi wing of al Qaeda, led by Abu Musab al-Zarqawi, claimed responsibility for the attacks. It had declared war on the election, vowing to kill any "infidel" who voted.

Despite the violence, election officials said the turnout had been above expectations. They originally put it at 72 per cent but later backtracked, saying possibly eight million had voted, which would be a little over 60 per cent of registered voters. Election commission spokesman Mr Farid Ayar acknowledged, however, that "the numbers are only guessing".

The government had set a target of at least 50 per cent of Iraq's 13 million registered voters as the barometer of success.

Many fear that instead of quelling the anti-US revolt, the poll could foment sectarian strife by further alienating Sunnis, delaying any withdrawal of American-led forces from the country.

After the official voting period had ended the US Secretary of State said the vote went "better than expected".

"Every indication is that the election in Iraq is going better than expected," Ms Condoleezza Rice said on ABC's "This Week" programme.

"What we're seeing here is the voice of freedom," Ms Rice said in the first response to the election from Washington.

"No, it's not a perfect election,"she conceded, but she called it a positive development no one had foreseen three years ago when Saddam Hussein was in power.