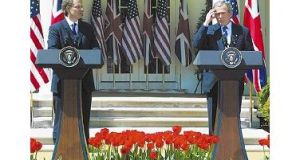 Mr Tony Blair and Mr George Bush during a news conference in the Rose Garden in the White House yesterday.

US: Confirming a major shift in US policy, President George Bush announced yesterday that the United Nations, rather than the US-led coalition, would determine the composition of a caretaker government in Baghdad after June 30th.

Speaking at the White House with British Prime Minister Mr Tony Blair by his side, Mr Bush said that the body to take over from the Iraqi Governing Council is "going to be decided" by the UN envoy to Iraq, Mr Lakhdar Brahimi. The two leaders reaffirmed their determination to stand firm on the June 30th handover date despite the upsurge in violence. However, their differences on the Middle East came sharply into the open.

With the coalition in Iraq about to suffer several defections after June 30th, most notably Spain and the Netherlands, the US urgently needs UN sanction to help control security in Iraq while a caretaker government prepares for elections.

Mr Blair, who met UN Secretary General Mr Kofi Annan in New York on Thursday, said "the UN will have a central role now in developing the programme and machinery for political transition to full Iraqi democracy". He said they would also seek a new UN Security Council resolution "to embody the political and security way forwards".

The two leaders differed on when elections would be held. Mr Bush said they would work with the UN to prepare for nationwide elections in January 2005, but Mr Blair told reporters that next year they would "move on to a new constitution and then finally to democratic elections". At their press conference in the Rose Garden Mr Bush warmly praised his major coalition ally, calling Mr Blair "a standup kind of guy" who "shows backbone and courage and strong leadership".

"Our nations face a stark choice," he said. "Britain and America and our allies can either break our word to the people of Iraq, abandon them in their hour of need and consign them to oppression: or we can help them to defeat the enemies of a free Iraq and build the institutions of liberty."

Mr Blair admitted it was "never going to be easy and it isn't now" in Iraq. They had agreed a five-point strategic, military and political plan, he said. They would stand firm, hold to the June 30th date, redouble efforts to give Iraqis control of security, push forward with reconstruction, and involve the UN. The G8 summit in the US in June would seek to broaden the agenda for international co-operation.

Later White House spokesman Mr Scott McClellan said that Mr Brahimi would conduct consultations in Iraq in May with coalition and Iraqi leaders about a caretaker government.

Mr Blair welcomed Mr Sharon's intention to withdraw Israeli settlements from Gaza but said he wanted the road map quartet - the US, the EU, the United Nations and Russia - to meet as soon as possible to discuss giving the Palestinian Authority economic assistance to cope with the new situation. The road map offered the only realistic route to two states living side by side in peace, he said. Mr Bush, who has ostracised Palestinian president Mr Yasser Arafat, gave no indication he would agree, and Mr McClellan later said that Mr Arafat was part of the problem, and "has undermined efforts every step of the way".

Mr Bush called on Palestinian leaders to "rise to the challenge" of accepting the plan, which includes permanent Israeli possession of parts of the West Bank and bars Palestinian refugees from returning to Israel.

Mr Bush retreated slightly from his endorsement of these elements saying, "All final status issues must still be negotiated between the parties."

Hundreds clash with police in Minneapolis as anger grows over shooting of black man 06:38
Opposition to Chawke’s apartments, BBC in mourning, and housing affordability 06:30
Béibhinn Parsons keen to do more than just wing it for Ireland 06:00
Methadone users ‘actively discouraged’ from becoming drug-free 05:04
Assets in Irish private markets expected to double in five years 04:53