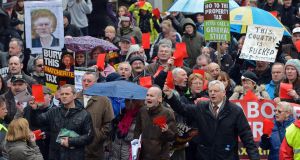 Anti-austerity and property tax protesters have claimed the campaign against household charges is set to become more determined and militant in the coming weeks.

Many of the estimated crowd of 5,000 people who marched in the rain from Parnell Square to Dublin Castle this afternoon claimed there was growing resistance to the new property tax.

A large force of gardaí including the Garda Mounted Unit policed the marchers - a number of whom of whom waved placards bearing slogans in support of the Garda's concern about cut backs - including: "Govt Shatter Garda Life".

Standing near the Rotunda Hospital before the march Terry Brennan, from Navan, Co Meath, said people were being asked to pay additional taxes, "not for development, but for the banks". He said politicians did not seem to understand "people can't pay". He also urged people across the State to get together to organise and event in their town or village for a national day of civil disobedience to be held on May 1st.

As the march got underway the crowd was encouraged by a number of people with loudspeakers chanting slogans mainly, it appeared, aimed at the Labour Party, in particular party leader Eamon Gilmore and Minister for Public Expenditure and Reform Brendan Howlin.

There was also criticism of Minister for the Environment Phil Hogan but Taoiseach Enda Kenny did not appear to be mentioned as frequently.

Speaking at Parnell Square, Dette McLoughlin said she was among three busloads of people who had travelled from Knocknacarra in Co Galway for the march. "We have been beggared", she said. "People are going without gas or electricity and now are being asked to pay for the roof over their heads".

As the group moved down O'Connell Street, Conor McKenna, from Swords, north Co Dublin, said he was one of a number of young adults who had mortgages which they were attempting to service, and who were suffering as a result.

He said his home at Drynham Hall was worth much less than he had paid for it in 2009, and as he was on a variable interest rate, his repayments were much higher than those on a tracker mortgage, and considerably higher now than they were when he had bought his home.

"If the [interest rate of the] tracker goes down , the banks will put their variable rates up. Some people wont manage," he warned.

Chanting a range of slogans such as "can't pay, won't pay" and "you say cut backs, we said fight backs" the marchers waved banners proclaiming the presence of groups from Carlow, Cork, Wicklow, Wexford, Limerick, Meath, Dún Laoghaire, Finglas, Galway, and Longford, among others.

A lengthy train dubbed “the gravy train” and detailing the names of towns and villages in Cork was carried along the street. A large number of political groups and the trade union Unite were also represented.

At Dublin Castle the crowd was addressed by a number of politicians opposed to the charges including TDs Richard Boyd Barrett, Joe Higgins and Joan Collins.

Speaking on behalf of organisers the Campaign Against Household and Water Taxes, John Lyons said "there is no doubt it is more angry now.

"There has been a major shift in peoples' attitudes,” he said, adding that a lot more people were coming out onto the streets.