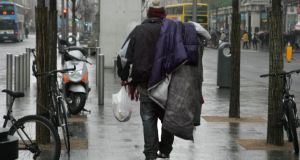 The longer a young person remains homeless the more difficult it becomes for them to exit out homelessness the first ever Irish longitudinal study on the topic has found. Photograph: Cyril Byrne/The Irish Times

The longer a young person remains homeless the more difficult it becomes for them to exit out of homelessness, the first ever Irish longitudinal study on the topic has found.

The study, entitled Young People’s Homeless and Housing Pathways, first interviewed 40 young people in 2004 and 2005, and followed their progress for the next six years.

“One of the clearest messages from the research is the importance of speedy exits from homelessness. Those young people who ‘get out’ early were likely to ‘stay out’, even if a number did return to homelessness for a period,” the report’s authors, Paula Mayock of Trinity College and Mary-Louise Corr of Edinburgh Napier University, found.

They first interviewed 40 young people when they were aged between 14 and 22. The researchers re-established contact with 37 of these young people for a second time between 12 and 18 months later, conducting interviews with 30 of them. Of that cohort, 17 had exited homelessness while 13 remained homeless.

Three to four years later they again made contact with 32 of the original 40 and conducted interviews with 28 of them. Of that cohort 13 remained homeless, 12 of who were male.

Speaking at the launch of the report today, Ms Maycock said that of the 13 who remained homeless 12 had spent some time in prison and five were in prison at the time the third phase was carried out in 2009 and 2010.

She said the “process of remaining homeless... can be characterised as an institutional circuit where they are constantly moving back and forth between hostels and places of detention”.

Ms Mayock said all of the young people who remained homeless at the end of the study had reported heavy or dependent drug use, which she described as the “double jeopardy of homelessness and drug use”.

The study was one of two reports published by the Department of Children today.

The second report by the Centre for Effective Services which reviewed the department’s Youth Homelessness Strategy found it had made a significant contribution to addressing youth homelessness. It also found the number of children and young people seeking services had diminished.

However, it said stakeholders had called for more of an integrated multi-agency approach to meeting the needs of vulnerable or at-risk children, and a change of the terminology from “homeless” to “out-of-home” to more accurately describe and address young people’s situations.

The report, by Sean Denyer, Aisling Sheehan and Avery Bowser, emphasised that the use of garda stations for children accessing emergency accommodation for the first time should be stopped and that emergency residential accommodation in Dublin should remain open to children throughout the day.

Michele Clarke of the Department of Children and Youth Affairs said that, when read together, the two reports gave the “depth that is necessary to understand the complexities” of youth homelessness.

She said that, since the department’s youth homelessness strategy was first launched in 2001, the issue of “children sleeping rough has been virtually eliminated”, but added that these studies showed challenges remained.