Economic, social and cultural rights panel also calls for referendum on position of women in society 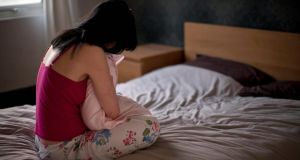 On women’s sexual and reproductive health, the UN Committee on Economic, Social and Cultural Rights said it was concerned at Ireland’s “highly restrictive legislation on abortion”. File photograph: Getty Images

Two referendums must be held to vindicate the economic, social and cultural rights of women in Ireland, according to the United Nations.

A referendum on abortion and another on the position of women are necessary, the UN Committee on Economic, Social and Cultural Rights said in a report.

Its concluding observations, following two days of hearings on Ireland’s compliance with the International Covenant on ESCR earlier this month, were published on Monday.

The 17-member committee heard from 12 NGOs and from a Government delegation led by Minister of State at the Department of Foreign Affairs, Sean Sherlock at the hearings in Geneva.

It was the first time Ireland had appeared before the committee in 13 years, and Monday’s report will be seen by many as something of a “report card” on how the State protected its citizens’ rights in areas such as housing, education and health, though seven years of austerity.

The committee made 45 recommendations, which might be loosely divided between women’s rights, the rights of religious minorities and the rights of vulnerable groups during austerity.

On women’s sexual and reproductive health, the committee said it was concerned at Ireland’s “highly restrictive legislation on abortion”.

It called for a referendum to repeal Article 40.3.3 of the Constitution, which guarantees to protect, as far as practicable, the equal right to life of the unborn and the pregnant woman or girl.

The committee also called for a revision of the 2013 Protection of Life During Pregnancy Act, which it says lacks clarity for women and clinicians as to what constitutes a threat to a woman’s life.

“It is particularly concerned at the criminalisation of abortion, including in the cases of rape and incest and of risk to the health of a pregnant woman, the lack of legal and procedural clarity on what constitutes a real substantive risk to the life, as opposed to the health, of the pregnant woman, and the discriminatory impact on women who cannot afford to get abortion abroad.”

The committee “recommends that the State party [Ireland] take all necessary steps, including a referendum on abortion, to revise its legislation on abortion, including the Constitution and the Protection of Life During Pregnancy Act 2013, in line with international human rights standards.”

It also calls for an amendment to Article 41.2 of the Constitution, which refers to women’s “life within the home” and guarantees to ensure women don’t have to work “to the neglect of their duties within the home”. It says this contributes to “pervasive gender inequality”.

It describes the Magdalene laundries as examples of “institutionalised forced labour” and calls on the Government to “conduct a prompt, thorough and independent investigation into” allegations of abuse and to “bring those responsible to justice and provide all victims with effective remedies”.

On the Government’s response to the financial crisis since 2007, the Committee says “it has been disproportionately focused on instituting cuts to public expenditure in the areas of housing, social security, healthcare and education, without altering [the] tax regime”.

It calls on Government to review all austerity measures taken, reminding it that such “policies must be temporary, covering only the period of the crisis, and they must be necessary and proportionate. They must not result in discrimination and increased inequalities.”

It is “concerned at the disproportionately high rates of unemployment among Travellers, Roma, young people, and persons with disabilities” and calls on the Government to “step up its efforts” on improving employment within these population segments with targeted measures.

It is also concerned at increased poverty among children, single-parent families, older people, people with disabilities, Travellers and migrants.

The committee makes six recommendations on the housing crisis, including increasing rent supplement, strengthening rights for households in mortgage arrears and taking “all necessary measures to meet the critical needs” of the homeless.

On the situation facing asylum seekers, the committee calls for improved living conditions in direct provision centres “including through...making the private actors accountable for the actions and omissions and address the mental health issues of asylum seekers”.

It also calls for an end to the right of schools to discriminate on the basis of religion in their admissions policies.