This ad is being blasted on social media, but is it offensive?

Phone company raises ire over use of ‘pro-choice’ slogan 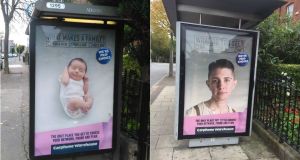 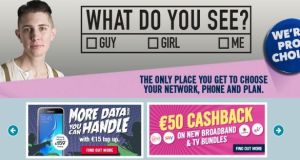 A screengrab from the Carphone Warehouse website showing the campaign

An ad campaign has landed phone company Carphone Warehouse in hot water... on social media in any case.

A series of advertisements featuring the slogan “pro-choice” has been described as insensitive and inappropriate amid the debate on abortion laws in Ireland.

The ads that have appeared on billboards and bus shelters in recent days feature various images and the slogans “We’re pro-choice” and “The only place you get to choose your network, phone and plan”.

One poster has a photograph of a baby and asks: “What makes a family?” and a series of tick boxes with the choices Mum and Mum, Mum and Dad or Dad and Dad.

The campaign is a direct reference to the ongoing abortion debate and the debate around the Eighth amendment of the Constitution that gives a woman and unborn child equal rights. A Citizens’ Assembly has been set up to examine the issue, but any referendum on repealing the amendment is now not expected until the end of 2018.

One person on the Carphone Warehouse Facebook page asked: “In what universe did your head of marketing think this would be an effective way to drive sales? Shameful!”, while another said: “This will offend both sides of a complex ethnically and political debate rooted in the metaphysical attributes of life. This is not how you do PR!”.

“The campaign features seven topically themed advertisements around the subject of choice. The language and imagery used in the campaign is designed to be deliberately striking, engaging and thought-provoking. We are not making any comment on the current debate in Ireland nor are we seeking to trivialise the issue. We believe that most people will understand the premise of this campaign and the context,” the statement added.

What do you think? Is the Carphone Warehouse ad campaign insensitive or are its critics being over-reacting. Vote in our poll.