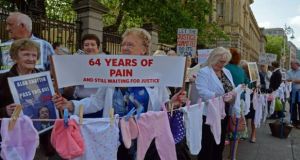 People taking part in a demonstration held by the group Survivors of Symphysiotomy outside Leinster House in June. Photograph: Eric Luke

The organisation representing survivors of symphysiotomy will today meet to discuss their response to the Government’s plans for survivors.

Late last month the Government appointed a judge to examine the feasibility of a compensation scheme for women who underwent symphysiotomies, a controversial childbirth procedure.

Symphysiotomies involved sawing a pregnant woman’s pubic bone in half to widen the birth canal.

The emergency meeting in Dublin will ask members to ratify an initiative to take its case to the UN Committee on Torture in the New Year, Marie O’Connor chairwoman of SoS (Survivors of Symphysiotomy)said in a statement..

The Government’s “attempt to block as many survivors as possible from access to justice and its recently announced redress process will be high on the agenda,” she said.

The meeting is due to be addressed by Sinn Fein TD Caoimhghin O Caolain.

Of the estimated 1,500 women who underwent the operation between the 1940s and 1980s, it is estimated that up to 300 survivors remain.

For many women the procedure left permanent injuries such as incontinence, difficulties walking and chronic pain.

Minister for Health Dr James Reilly last month announced Judge Yvonne Murphy has been appointed to examine how a redress scheme could be structured.

Under terms of reference, she has been tasked with drawing up a series of recommendations by next February to “assist in finding closure” for women affected by the operation.

The Government has agreed to contribute to an ex gratia scheme, if she recommends one.