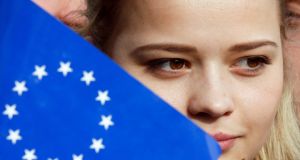 The Generation What survey was launched in ten countries on Tuesday. Photograph: EPA/Sergey Dolzhenko

RTÉ is seeking 18-34-year-olds to take part in a pan-European online survey that it hopes will produce the “most comprehensive sociological study” of the age group ever presented.

The Generation What survey was launched in ten countries on Tuesday. RTÉ2 channel controller Bill Malone said it contains 21 themes “ranging from reaction to the economic crisis to love to inequalities”.

The questions have been designed by UCD sociologists Kevin Myers and Amanda Slevin, who will also work on processing the data once it has been collated. The data will then be used to produce two one-hour documentaries in the autumn.

“The idea is to make the most comprehensive and biggest youth survey in Europe,” said Mr Malone. “We want to create a very comprehensive snapshot of the aspirations, the fears, and the worries of young people.”

Processing the data will involve a three pronged approach. There will be a quantitative side based on the questionnaire results, a qualitative approach based on documentary videos of groups of people and individuals filling out the survey, and a comparative approach looking at how the answers compare with other European societies.

“You can compare your answers to those of the rest of Ireland and Europe. So are you conservative, are you liberal, are you normal, are you not?

“We’re ultimately going to produce two one-hour documentaries later this year, which will be the sociological analysis of the survey, and which we hope will provide a very valuable window into contemporary Ireland today.

The survey will be online at http://generation-what.ie for three weeks.