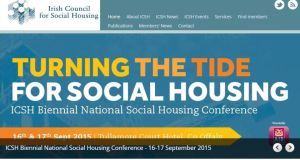 The Irish Council for Social Housing website. In its pre-Budget submission, the council, which represents non-profit housing associations, is calling for vacant local authority lands to be made available to social housing providers.

Social housing providers are seeking €120 million of funding in next year’s Budget to provide more than 4,000 homes for people on local authority housing waiting lists by 2017.

In its pre-Budget submission, the Irish Council for Social Housing (ICSH), which represents non-profit housing associations, is also calling for vacant local authority lands to be made available to social housing providers.

Since the late 1990s, local authorities have operated a scheme where they transferred unused lands to housing associations for a nominal fee.

However, the scheme, which was most commonly used by larger urban local authorities, has fallen into disuse in recent years, the ICSH said.

“Traditionally, non-profit housing associations do not have land banks at their disposal. Therefore, access to local authority land banks that are available for housing will be key to ensuring our sector plays its part in resolving the current housing crisis,” ICSH chief executive Donal McManus said.

Local authorities have more than 700 vacant sites which could support 18,000 homes, 80 per cent of which are in high-demand social housing areas.

Housing associations could develop significant numbers of these sites if they could use the land without having to pay market value, Mr McManus said.

“If associations have to pay full market costs for available land, this will restrict their capacity to provide additional housing supply.

Housing associations were also keen to become involved in “stock transfer”, he said, where local authorities which did not have the resources to regenerate or refurbish old housing schemes would transfer them to a housing body which would undertake the work and then manage and maintain the housing.

This had already worked successfully in two cases in Dublin, the ICSH said - at St Joseph’s Mansions managed by Cluid Housing in Dublin 1, and the older people’s housing complex in Ballygall, Dublin 11, managed by Fold Ireland.

The ICSH wants the Government to allocate €90 million of Capital Assistance Scheme funding, which provides a grant of up to 100 per cent for certain categories of housing, including housing for the homeless, as well as €30 million in low-interest loan funding through the Capital Advanced Leasing Facility.

It also wants Rent Supplement and Housing Assistance Payment caps to be brought into line with the private rental market, and rent limits to be kept under review every six months to ensure fluctuations in the rental market are addressed.