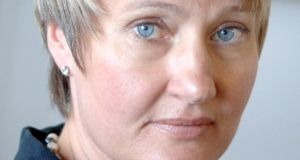 Detective Inspector Kajsa Wahlberg: “Prostitution is viewed as violence against women, and the majority of women in this world are hurt by it – physically and mentally.”

Detective Inspector Kajsa Wahlberg, of the Swedish police’s anti-trafficking unit, also said it should be accompanied by “well funded” social supports for women and girls who want to exit the sex-industry, .

Sweden introduced legislation in 1999 to criminalise the purchase of sex – a model campaigners would like to see emulated here. Key to the Swedish approach, said Det Insp Wahlberg, was that it had a gender-equality perspective first, rather than a criminal-justice one.

“Prostitution is viewed as violence against women, and the majority of women in this world are hurt by it – physically and mentally.”

Det Insp Wahlberg, who is also the Swedish government’s national rapporteur on combating trafficking, was in Dublin today to meet organisations campaigning for ’Swedish model’ legislation.

Key to her country’s approach, she said, was that “it is not repressive”.

“We ensure that the women in the sex industry are not criminalised and we support those who want to exit prostitution.”

It was not illegal in Sweden for women to run a brothel together or to solicit on the streets, she said. It was illegal to ‘pimp’ or promote the prostitution of others however.

Swedish police worked closely with social services, representatives of which always accompanied police on any raids on brothels.

The Criminal Law (Sexual Offences) Bill is expected to be published in coming months. While it proposes to criminalise the purchase of sex it does not decriminalise soliciting in public, or sex work in brothels.

Critics say this will leave women and girls vulnerable to prosecution. They also say the legislation could push the industry further underground.

Detective Wahlberg said this should not happen as long as the gardaí are sufficiently resourced to enforce it.

She said it was resource intensive legislation, requiring many man-hours to track, locate and prosecute illegal trafficking and management of prostitution.

“It involves a lot of ‘listening in’ to conversations, translating. It is very resource intensive and very costly. Prostitution is already very ‘underground’. If law enforcers want to find it, that is their job. ”

It was known, she said, that women felt safer in the sex industry in Sweden than they did elsewhere.

“The men who purchase the sex want everything done very discreetly, so they do not cause trouble for the women, because they know if there is any trouble, the women can report the men without risking prosecution themselves.”

There had been a substantial reduction in on-street prostitution since 1999, she said, but agreed this may have occurred anyway with the advent of the internet. The legislation had disrupted traffickers, however.

Key, she said, was that the approach was women-centred.

“We are not interested in prosecuting them. If women want to be in the ‘industry’ we will not disturb them.”