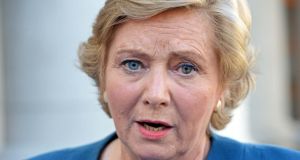 The wording of the Referendum on Marriage Equality has been published by Minister for Justice Frances Fitzgerald. Photograph: Eric Luke/The Irish Times

Issues surrounding children and the family are emerging as the main battle-lines of debate on same-sex marriage following the publication of the wording for the referendum.

The wording proposes to amend the Constitution by inserting a new section stating: “Marriage may be contracted in accordance with law by two persons without distinction as to their sex.”

The wording was published by Minister for Justice and Equality Frances Fitzgerald and will be known as the Referendum on Marriage Equality.

The vote will be held towards the end of May on a date yet to be decided, with the poll coinciding with a referendum that proposes to reduce the age of eligibility for presidential candidates from 35 to 21. The Carlow-Kilkenny byelection will also be held that day.

Ms Fitzgerald also said that the Government was preparing an Implementation Bill which would address the changes to legislation that would be required should the referendum be carried.

While many of those advocating a Yes vote emphasised that same-sex marriage would be considered equal under the Constitution to heterosexual marriage, those campaigning for a No vote contended that it would lead to a change whereby legal and constitutional protection for a child’s rights to a father and mother would be removed.

It has yet to be formally published, but was required, said members of all main parties yesterday, to give full clarity to issues surrounding adoption and how family was defined.

Fianna Fáil leader Micheál Martin pledged his party’s support for passing the referendum. “For Fianna Fáil, the upcoming referendum is a question of equality – whether we as a society believe that those in gay relationships should be afforded the same security and respect as those in heterosexual relationships.”

Independent Senator Rónán Mullen said the Government had chosen a title which was “politically loaded” and it had used its majority to manipulate public opinion.

1 Shops, hairdressers and hotels expected to reopen next week
2 Miriam Lord: Unity and common purpose in spades but not for Covid fight
3 Stir-crazy Dutch holidaymakers set to descend on Caribbean island
4 Joe Biden does not want to see guarded Border in Ireland after Brexit
5 Covid-19: Museums, cinemas set to reopen next week as Varadkar warns of New Year restrictions
Real news has value SUBSCRIBE