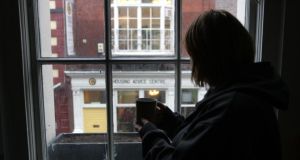 Roughan McNamara, campaigns and advocacy manager with Focus Ireland, said: “We are starting to see people in mortgage arrears coming to our services looking for advice. The majority at this stage are looking to know what their options are, though some are already homeless.” File photograph: Brenda Fitzsimons/The Irish Times

Households in mortgage arrears are seeking support from homelessness charities in increasing numbers.

Housing advice charity Threshold also says tenants in buy-to-let properties, whose landlords are in mortgage distress, are seeking advice in growing numbers, worried their homes may be repossessed by banks or facing having their tenancy taken over by a receiver.

Threshold has helped 635 households in buy-to-let properties that have gone into receivership in the last 18 months.

“While tenants are made to pay rent to the receiver, often the receiver does not regard themselves as having to fulfil the normal obligations of the landlord, including giving written notice of termination, carrying our repairs or returning the tenant’s deposit,” said Bob Jordan, Threshold chief executive.

Mr McNamara told The Irish Times: “We are starting to see people in mortgage arrears coming to our services looking for advice. The majority at this stage are looking to know what their options are, though some are already homeless.

“There needs to be an obligation that equal consideration is given to the needs of families and single people as there is to the needs of banks. The banks seem to be very slow to offer restructuring arrangements, and schemes like the mortgage-to-rent are clearly, at the moment, too cumbersome and restrictive for the majority of people in serious mortgage distress.

“There need to be real, accessible solutions for people, not just solutions on paper.”

He said while many whose homes had been repossessed might find housing in the private rented sector, this option was closing off as rents continued to increase, leaving increasing numbers facing the prospect of homelessness.

Threshold stressed the impact of the mortgage arrears crisis was not limited to homeowners.

“On a daily basis, Threshold directly advocates on behalf of tenants with banks and receivers, as tenants are excluded from the legal process in relation to mortgage arrears and repossessions,” said Mr Jordan.

“Threshold believes that tenants faced with eviction due to repossession of a mortgaged property should always be able to refer a complaint against a bank or a receiver to the Private Residential Tenancies Board, in order to safeguard their rights as tenants.”