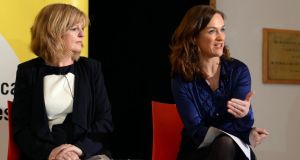 Clinical decisions on whether or not a pregnant woman’s life is in danger and can only be saved with an abortion are difficult and “framed in a criminal context” which may see both mother and doctor imprisoned, Dr Rhona Mahony, Master of the National Maternity Hospital has said.

Speaking at the launch of Amnesty International’s “She is not a Criminal” report on Irish abortion law, Dr Mahony said in the current legal landscape women will continue to seek abortions abroad or “unknown pills” over the internet in acts of desperation.

The Protection of Life During Pregnancy Act allows for abortion in certain limited circumstances, but Amnesty and campaigners believe legislation should allow for access to wider, “safe legal abortion”.

However, the process used to determine this is “cumbersome and complicated” and while it relies on clinical judgment delivered in good faith “it is framed in a criminal context”, she said.

“An error in clinical judgement is potentially punishable by custodial sentence of 14 years for both the mother and for her clinician in the event an identified risk is somehow not substantial enough.”

She also pointed out that “waiting for a woman to be sufficiently ill so that she is perceived as to be at risk of dying is potentially dangerous. It relies on a range of presumptions” including that clinicians can “accurately predict the risk of dying”.

A number of conditions and complications can cause serious illness and even death but “the point at which serious illnesses progress to the possibility of dying doesn’t come clearly marked. It’s not always clinically possible to separate the two nor is it possible to predict clinical courses with precision”.

“What is a substantial risk to life: 10 per cent, 20 per cent, 80 per cent risk of dying? This is medical roulette.

“I cannot think of any other circumstance in which risk to life on balance is in the shadow of a custodial sentence for both the clinician and the woman.”

Gaye Edwards from Co Wicklow - who had to seek an abortion in the UK after receiving a diagnosis of fatal foetal abnormality in 2001 - said she was told the only option open to her “in this jurisdiction” was for doctors to intervene if the baby died.

“However this was unlikely because effectively I was a life support machine for this baby,” she said. “What I hung on to; what I remembered afterwards were the words: in this jurisdiction. That was a clue to me that in another jurisdiction there might be other options.”

Ms Edwards and her husband Gerry began to look and eventually found a hospital in the UK where they found the “sympathy and compassion that had been absent when we were in Dublin”.

Amnesty’s report was criticised by the Life Institute, which said the organisation’s position had no basis in fact or international law.

“There is no treaty or convention acknowledging a supposed ‘right’ to abortion, yet the right to life of every person is widely recognised in international law,” it said. “Amnesty was founded to highlight human rights abuses, especially in regard to political prisoners and those suffering under unjust regimes. But now it seems to spend most of its time attacking the rights of the most vulnerable person of all - the unborn child.”

1 Joe Biden does not want to see guarded Border in Ireland after Brexit
2 Stir-crazy Dutch holidaymakers set to descend on Caribbean island
3 Bloomberg ranks New Zealand top in fight against Covid-19 - but how did Ireland fare?
4 Covid-19: Museums, cinemas set to reopen next week as Varadkar warns of New Year restrictions
5 Shops, hairdressers and hotels expected to reopen next week
Real news has value SUBSCRIBE