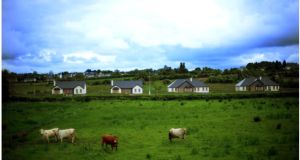 The Department of the Environment projections that revised planning legislation to deliver 4,000 social housing units by 2020 have been described as “pie in the sky” by the construction industry. Photograph: Bryan O’Brien / The Irish Times

Department of the Environment projections that revised planning legislation to deliver 4,000 social housing units by 2020 have been described as “pie in the sky” by the construction industry.

It was a “missed opportunity to develop a sustainable supply of social housing”, said Tom Parlon, director general of the Construction Industry Federation (CIF).

However, housing advocacy groups said the plan could have a “dramatic impact” on the social housing crisis, while stressing it must be “robustly enforced”. They also warned it was a medium-term plan when immediate steps were needed to address the homeless crisis.

Mr Parlon said relying on 10 per cent of new developments to be put aside as social housing missed the fact that more than half the units built annually were one-off units. Of the 8,301 units constructed last year, 4,730 or 57 per cent were “one-offs”.

The CIF has called for a 1 per cent levy on all housing transactions to be ring-fenced for a social housing budget. This would be a more reliable funding stream, it says.

A spokesman for the department said the projection of 4,000 units was “in fact very conservative”.

Threshold chairwoman Aideen Hayden welcomed the plan. She said if Part V had been enforced through the “boom years” there would be 45,000 more social housing units today. “It needs to be really robustly enforced this time.”

The Irish Council for Social Housing executive director Donal McManus said although housing associations received just 2,000 social units under the previous Part V provisions at a time when 80,000- 90,000 homes were built, the units they did get “were high quality”.