Rent supplement will not be increased by Department 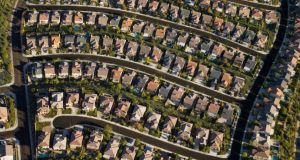 Rents in Dublin increased by almost 10 per cent last year and by almost four per cent outside the capital, though increases have been higher in the counties around Dublin.

Rent supplement, which is provided to the lowest income households to help them pay for housing, will not be increased the Department of Social Protection will announce later today.

The decision to maintain the rates at levels set in June 2013 comes despite repeated calls from organisations working with the homeless and housing-vulnerable for increases to meet market rents.

Rents in Dublin increased by almost 10 per cent last year and by almost four per cent outside the capital, though increases have been higher in the counties around Dublin.

The department’s decision not to increase these limits is set out its long-awaited review of rates, published today.

Though recommending no increase in the core rates it calls for flexibility by community welfare officers in applying the limits, particularly when dealing with households at risk of homelessness.

It acknowledges there has been a “substantial fall in available supply of rentable housing stock since undertaking the previous review” but says increasing rent supplement would increase in rents across the board - particularly at the lower end of the market.

“If we did what the left and ultra-left were pushing for - to increase and increase against the rental support levels as we did in 2012 and 2013 - those increases were absorbed very quickly and drove up rent for people at work and paying their own rent privately,” she said. “After detailed examination last year we decided that what we could best is for an individualised approach.

“We need to do that soon to offer rent certainty. Some landlords are just plain greedy and are pushing for higher and higher rents. A lot of people who campaigned to increase rent supplement for the best of motives helped to drive rents up. We are now in a situation where rents have risen very significantly in an economy with almost no inflation. Levels of some increases are simply not justified.”

There are 71,500 households in receipt of rent supplement, of which about 48,000 are deemed “long-term dependent” on it.

Together with the approximately 6,000 households on the Rental Assistance Scheme, they account for about 34 per cent of the private rented sector. Some 24,000 households in Dublin are receiving rent supplement

Given the extent of the Department’s involvement in the market any increase in rent supplement rates could “create new ‘property floors’ for all tenancies...including... low income working families” who are not receiving the supplement.

As the market cools and more supply comes on stream, higher maximum limits could keep rents “artificially higher than normal supply and demand conditions would dictate”.

This would “potentially lead to structurally in-built higher rental costs for low-income working families and students”, it continues.

“The impact of increasing limits will yield only a very marginal increase in available supply for rent -supplement recipients, if at all, with the only certainty that raising limits will increase rent costs disproportionately for the Exchequer with little or no new housing available.”

Concerns are raised also about the potential impact on property prices and on wider consumption if rents rose across the board.

However “a key finding...is that rent supplement policy must continue to allow for flexibility where landlords seek rents in excess of current limits, in particular for families seeking to remain in their current rented accommodation.

“Where landlords insist on a premium based on the lack of availability of suitable accommodation...strict enforcement of the maximum rent limits may not be an appropriate policy response ”.

The report says housing supply must increase and points to the Government’s ‘Construction 2020 – A Strategy for a Renewed Construction Sector’ and the ‘Social Housing Strategy 2020: Support, supply and Reform’.

It also says the continued transfer of households from rent supplement to the new Housing Assistance Payment will remove poverty traps and allow for greater flexibility in responding to changing market rents. Some 500 households were on HAP at the end of 2014. It is expected this will increase to 8,400 households this year.