Humanist body to place adverts calling for end to discrimination 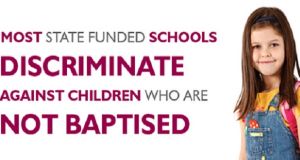 Part of the HAI poster, which is to be displayed in prominent locations.

Advertisements calling on the public to support an end to discrimination against non-baptised children in State-funded schools are to be placed in train stations, bus-shelters and other “prominent locations”.

The Humanist Association of Ireland (HAI), which is behind the campaign, said it is an “injustice” and a “human rights issue” that schools, which are funded by the taxpayer, are permitted in their enrolment policies to “turn children away who are not members of their ‘flock’”.

The association takes issue with the State allowing religious schools, particularly of the Catholic and Protestant denominations, to give precedence to baptised children in circumstances where demand for places in the school exceeds the number available.

Brian Whiteside, the HAI’s director of ceremonies, said the association heard on a regular basis from parents who had been told by school mangers “to just go and get their children baptised”.

“This is simply wrong and is forcing parents who no longer have any religious sentiment to have their children baptised just to get them into a local school . . . It is unconscionable that the State can stand over this.”

For parents who were not baptised into a Christian church, whether from atheists or other backgrounds, this discrimination was even worse as they effectively didn’t even have the option of having their children baptised, he said. Statistically, he said, there was a move away from religiosity. One third of all weddings celebrated last year were non-religious.

The poster ads, which will be in place for three weeks, invite people to text “EQUAL” to 51000 or to vote at HAI’s website, humanism.ie/vote