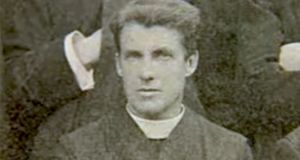 Fr John Sullivan was born on Eccles Street on Dublin in 1861 and entered the Jesuit Order in 1900. He died in February 1933.

The Archbishop of Dublin Eamon Martin welcomed the news, saying: “It is wonderful news that Pope Francis has approved the decree that has authenticated a miracle attributed to Jesuit priest Fr John Sullivan.

“I know that the news will be welcomed by all those, in Ireland and around the world, who have a devotion to him and who have been inspired by his ministry,” he said.

“Fr Sullivan had great time for and devotion to the sick. He was a man who had a great gift of consolation and healing to those who were sick.”

The archbishop said Fr Sullivan “had that readiness to serve those who were in need.

“It is because of his reputation as a holy and healing person that so many people still visit his tomb in Gardiner Street Church in Dublin each year to pray for his intercession.

“In reflecting on Fr Sullivan’s dedication to those who were sick, I think of all those who minister to the sick today - hospital chaplains, nurses, doctors, carers and all those who quietly take care of a loved one who is suffering from ill health - and give thanks for their dedication,” he said.

The archbishop also paid tribute to the Jesuit community for their contribution to education and social justice in Ireland.

Former taoiseach Bertie Ahern quoted Fr Sullivan in his farewell speech to the Dáil in 2008: “Take life in instalments. This day now, at least let this be a good day. Be always beginning. Let the past go. Now let me do whatever I have the power to do.”