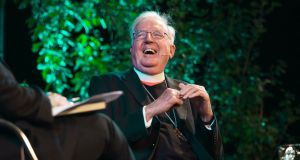 Cardinal Cormac Murphy-O’Connor speaking at the Hay Festival in Hay-on-Wye, south Wales. “I don’t think we were aware of the addictive nature of paedophilia and the terrible damage that’s done to the victims,” he said. Photograph: Elinor Williams/Hay Festival/PA Wire

Former Archbishop of Westminster Cardinal Cormac Murphy-O’Connor has admitted he is deeply ashamed of the way he handled sex abuse allegations concerning a Catholic Church priest in the 1980s.

Cardinal Murphy-O’Connor told a festival crowd how, as the Bishop of Arundel and Brighton, he allowed priest Michael Hill to become the chaplain of Gatwick Airport despite Hill confessing to him that he had abused young boys.

The cleric (82) said he sent Hill for therapy before moving him to a new parish after being given assurances he would have no contact with children.

However, while at his new airport post, Hill went on to sexually assault a young man with learning difficulties who had missed a flight. Hill was jailed in 1997 for a string of attacks and then again for another five years in 2002 after disclosing fresh abuse during a sex offender treatment programme.

Speaking at the Hay Festival in south Wales, Cardinal Murphy-O’Connor said he would have done things differently now.

He said: “I’d like to say something I wouldn’t have said 20 or 30 years ago – think first of the victims and how important it is to listen to them and their story, the anger and the pain.

“I knew child abuse was wrong and removed him from the parish.

“Now, under the new regulations, he would go to the social services and the police automatically.

“But I don’t think we were aware of the addictive nature of paedophilia and the terrible damage that’s done to the victims. Now I know much more about that.”

Cardinal Murphy-O’Connor made the remarks while taking part in a Q&A session with former Independent editor and BBC Radio 4 presenter Rosie Boycott.

He denied that the way he acted following Hill’s confession was tantamount to a cover-up and aimed to “put the good name of the church” before victims or justice.

“I can’t remember thinking about protecting the good name of the church,” he replied. “I thought ‘this man is damaging children’ – so I moved him out and put him into a therapy centre.

“To my shame, when he came back to see me a month later he begged on his knees. I looked at the reports and one of them said he mustn’t go into a parish with children.

“I made the grave mistake of sending him to Gatwick Airport and . . . he did abuse again.”

Cardinal Murphy-O’Connor said the whole affair had been a big “learning curve for him”. He said: “What we need to do now is that if there is any allegation of child abuse then it goes straight to the police.

“And not just in the Catholic Church . . . there has got to be a culture of safeguarding.”

On the matter of Ireland’s referendum on same-sex marriage, the Reading-born cardinal said he hoped the country would vote no.

“Marriage has always been part of a language between man and woman and family and children and community.

“Gay couples may also say [it is the same] but I don’t think it is.

“The heart of the structure in our country is the family. The more family breaks down in different ways, the less we have of a healthy community.

“The greatest evil, in my view, is the breakdown of family life in our country.” – (PA)