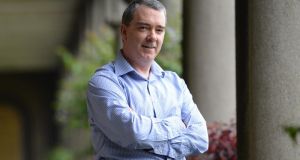 Chair of the Iona Institute board of directors Dr John Murray. Mr Murray has criticised a number of high-profile Catholics calling for a Yes vote in the same-sex marriage referendum. Photograph: Dara Mac Dónaill/The Irish Times

The chair of the Iona Institute’s board of directors Dr John Murray has questioned whether those prominent Catholics who have called for a Yes vote in the same-sex marriage referendum, including priests and theologians, had rejected their faith.

He expressed “astonishment and disappointment at those theologians and prominent Catholics who support a Yes vote” in the referendum.

“People such as ex-president Mary McAleese, Fr Peter McVerry, Prof Linda Hogan, Fr Gabriel Daly, Angela Hanley, and Sr Stanislaus Kennedy, and others had not made the slightest reference in their promotion of same-sex marriage to the clear teaching of our Lord,” he said.

Mr Murray said “that God has founded marriage as a natural reality on our being created male and female”.

“In every case that I have read or heard, none of these people has referred to the actual teaching of Jesus on marriage”, which was “surely the foundation of any theological or faith-shaped response to this referendum”, he said.

Mr Murray also said, in the letter to the Irish Catholic newspaper: “We need to ask Catholics who promote a vote to change our constitutional and legal understanding of marriage: Do you consider the church’s practice and understanding of the sacrament to be discriminatory?”

He said that if they believed it was seriously unjust to treat same-sex relationships as in any significant way different from opposite-sex unions with regard to marriage and family and children, and wanted this enshrined in the Constitution, “then how can they not consider the sacrament to be discriminatory and wrong? And thus reject their Catholic faith and the gospel of Christ?”

Patrick McCrystal, director of Human Life International - Ireland, has said the marriage referendum was “about whether or not the Irish people accept God’s law and, irrespective of the outcome, the law of God remains immutable”.

He said that former president Mary McAleese “has missed the point”.

“The Catholic curch teaches the sexual conjugal act is the exclusive preserve of man and woman as husband and wife; it is an act designed by God to be exercised by no one else . . . Premarital acts, extramarital acts, heterosexual, homosexual, solitary acts or with others - all seriously jeopardise the eternal welfare God created us for, to enjoy with him in heaven.”

He said that everyone “is called to chaste self-mastery, according to their state; married or single, heterosexual or homosexual. There is no discrimination in this statement”.

“We shouldn’t even be having this referendum. If we, as an Irish nation, chose to accept the amendment, we turn away from God and his laws. We seriously dissolve any claim we have to expect God’s blessing and protection as a nation.

Mr McCrystal said: “How can we, with integrity, write into our Constitution recognition for homosexual pairings, in a document that invokes the authority of the Blessed Trinity and our obligations to Jesus Christ in its preamble?”