First pope from the Americas, Francis raises hopes of change among faithful

‘Pray for me’ he asks crowds in St Peter’s Square 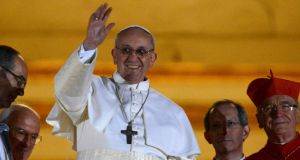 Newly elected Pope Francis, Cardinal Jorge Mario Bergoglio of Argentina appears on the balcony of St Peter's Basilica after being elected by the conclave of cardinals. Photograph: Reuters 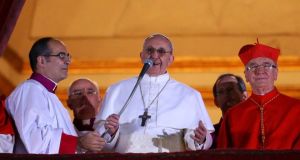 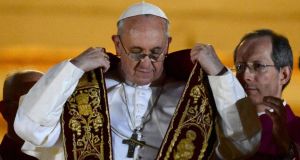 Newly elected Pope Francis, Cardinal Jorge Mario Bergoglio of Argentina, appears on the balcony of St Peter's Basilica after being elected by the conclave of cardinals, at the Vatica this evening.

It has happened. People around here have been talking about it for years and years but it has finally happened.

The Cardinals of the Catholic Church have chosen a non-European pope, someone whose Latin-American origins, blend of doctrinal orthodoxy and concern for the poor would suggest that things might change around here, although perhaps not as much nor as fast as some might want.

When the name of 76-year-old Argentine Jesuit, Jorge Maria Bergoglio was proclaimed to the 100,000 strong crowd in St Peter’s Square, there was a gasp with many not understanding who had been elected.

When the man himself soon appeared, he did so with a humility that struck a very different note. Given his track record as a defender of the poor, he may prove to be the Catholic Church’s version of Barack Obama in that he could well generate unrealizable hopes and expectations about the future of the Church.

In St Peter’s Square, there were literally people jumping for joy. Those who would like to think that he is going to change the Church’s position on a whole range of issues including Catholic teaching on homosexuality, on contraception and clerical celibacy may however be disappointed.

The new pope’s immediate schedule makes the point. At a briefing last night, senior Vatican spokesman Father Federico Lombardi, himself a Jesuit like the new pope, said that Pope Francis’s first public outing would be to visit the Basilica of Santa Maria Maggiore in the morning where he will pray to the Madonna.

That hardly sounds like a radical change. However, the fact that on Saturday he intends to hold an unprecedented meeting with the media in the Paul VIth Hall sends a very different message, one of openness from an organization which, frankly, has often treated the secular media with total distrust.

Many Argentines from ex-footballer Diego Armando Maradona to Ricardo Alfonsin, son of Argentina President Raul Alfonsin, expressed an immediate sense of understandable national pride at the election of Pope Francis.

Even president Obama was much enthused calling him a symbol for the “poor and the vulnerable”. To some extent, all that was inevitable.

What was much less expected was that the Al Azhar Sunnite university in Cairo should react positively with sources saying that perhaps the time of the “Cold War” between Catholicism and Islam, in the wake of Benedict’s 2006 Regensburg speech, may now come to an end.

For the first time ever, too, Pope Francis got to telephone his predecessor, exchanging a few words with Benedict, Roman Pontiff Emeritus.

In the coming days, too, he intends to meet with his predecessor. All very different, if not to say unprecedented.

Summing up the Conclave’s choice, Father Lombardi called it a “surprise” and a choice which demonstrated “the Cardinals’ willingness to broaden their vision”. He also called the new pope someone who represents a continuity with Pope Benedict. As of now, that remains to be seen.