Church leaders seek guidance ahead of private vote next week 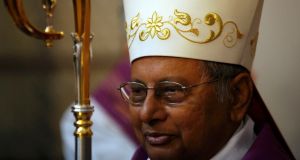 Sri Lanka's Cardinal Albert Malcolm Ranjith, Archbishop of Colombo, arrives to lead Mass at the San Lorenzo In Lucino church in Rome today. With the vast majority of Catholics now living outside Europe, there is growing pressure for a pontiff from another part of the world. Photograph: Chris Helgren/Reuters

Roman Catholic cardinals prayed today for spiritual guidance ahead of a closed-door conclave to choose a new pope to lead the church at one of the most difficult periods in its history.

Cardinals will hold a last pre-conclave meeting tomorrow to fine-tune a job description for the man they think would be best suited to lead a church hit by sexual abuse scandals around the world as well as allegations of corruption in the Vatican itself.

The 115 cardinals who will take part in the election as of Tuesday were subsequently celebrating Masses in Rome today, either in the quiet of private chapels or in the grandeur of Rome's great cathedrals and basilicas.

"The conclave is just around the corner. Let us pray that the holy spirit gives the church a man who can lead her in the footsteps of the great pontiffs of the past 150 years," said Cardinal Angelo Scola of Milan, at his Mass in Rome.

Scola (71), is considered the leading Italian candidate to succeed Pope Benedict XVI, who cast the 1.2. billion-member church into uncertainty last month when he became the first pontiff in six centuries to abdicate instead of ruling for life.

"We need to make the right decision," Cardinal Odilo Pedro Scherer of Sao Paulo (63), who is considered Latin America's leading candidate, said at his public Mass in a small, Baroque church packed with wellwishers and reporters.

Boston’s Cardinal Sean O'Malley asked God to "enlighten the church" so the cardinals would choose a pope to confirm everyone in the faith.

Other cardinals such as Manila's Luis Antonio Tagle (55), considered a long-shot because of his relatively young age, kept a lower profile, mostly staying inside the walls of seminaries or other religious institutions.

At the Vatican, St Peter's Square was eerily quiet, without a pope for a second consecutive Sunday. The windows of the papal apartments overlooking the square remained closed.

Benedict, who is now "Pope Emeritus" and has no residual authority over the church, is at the papal summer retreat south of Rome while his permanent residence in a Vatican convent is being prepared.

"This is a time of overall crisis but also a time of crisis in faith," Italian bishop Rino Fisichella told Italy's Tgcom24 television, adding that he hoped a new pope would appear from the window next Sunday.

The 115 cardinal electors under the age of 80 will enter the Sistine Chapel on Tuesday afternoon and hold one vote that evening. They will vote repeatedly thereafter until one of their number receives a two-thirds majority, or 77 votes.

If a pope is not elected in two or three days it means cardinals are probably severely divided and might have to turn to a dark horse candidate to find consensus.

No conclave has lasted than more than five days in the past century. Pope Benedict was elected within barely 24 hours in 2005 after four rounds of voting.

But this time, no clear favourites have emerged to take the helm of the troubled church.

"Prior to the last conclave, everyone recognised Ratzinger was the frontrunner on the day the conclave began. The same was true for Paul VI (in 1963) and Pius XII (in 1939)," said Father Tom Reese, Jesuit historian and author of Inside the Vatican.

Apart from Italy's Scola and Brazil's Scherer, others who have been mentioned the most are Canada's Marc Ouellet. US cardinals such as O'Malley or Timothy Dolan of New York have also been cited as candidates.

With the vast majority of Catholics now living outside Europe, there is growing pressure for a pontiff from another part of the world.

Many observers believe a Latin American, Asian or African pope could bring attention to the poverty of the southern hemisphere in the same way the Polish-born John Paul put a spotlight on the East-West divide after he was elected in 1978.

The Sistine Chapel has been readied to receive the sequestered cardinals, who will use stoves to tell the outside world whether or not they have chosen a new leader - black smoke signifying no decision and white smoke announcing a new pontiff.

One stove, made of cast iron and used in every conclave since 1939, will be used to burn ballots. The second stove is an electronic one which will use electronically ignited flares to send out either white or black smoke.

Workmen have built rows of tables where the cardinals will sit under the gaze of Jesus in Michelangelo's massive Last Judgment panel on the wall behind the altar.