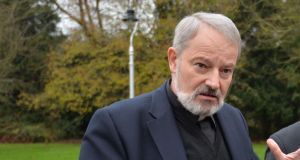 Bishop of Elphin Kevin Doran: Use of the title “marriage equality” for the May vote is misleading. Photograph: Alan Betson/The Irish Times

Bishop of Elphin Kevin Doran believes some people may have a genetic disposition towards being gay and admitted that he was confused about his sexuality as a teenager.

In a wide-ranging radio interview on Newstalk Breakfast he also implored women who had been raped to avoid having abortions as a way to “get back” at their attacker.

“Some people perhaps have a predisposition genetically to being gay; perhaps in some cases people are gay because of contexts, circumstances related to their own experience of life as young people.

“One of the things I would suggest also from my own experience working as a university chaplain would be that many young people in their late teens are confused about their sexuality, understandably I think. I’d have to say I was myself,” said the cleric, who is one of the leading advocates for a No vote in the upcoming same-sex marriage referendum.

Bishop Doran said that the use of the title “marriage equality” for the May vote is misleading, before adding that parents are not really parents despite being entrusted with the care of children.

“The whole relationship between life-giving and parenthood is being separated . . . Children lose the right to have a relationship with their parents,” he said.

Responding to Bishop Doran’s comments, Kieran Rose from the Campaign for Civil Marriage Equality said such views are “unfortunate”, and reiterated his organisation’s belief that civil marriage and religious marriage are two distinct entities.

On the topic of fatal foetal abnormalities, Bishop Doran said that terminations serve only to devalue human life and should not be looked upon as a viable solution to dealing with such situations.

“Objectively speaking, to kill another human being is always sinful . . . The child is still a human being, you don’t destroy a life in order to get back at the mother’s rapist,” he said of cases involving non-consensual sexual assault.

Coronavirus: Six deaths and 675 further cases reported in Republic 18:30
Gardaí contact husband as mother and two children found dead at south Dublin house 18:06
Ex-GAA player had up to €386,000 transferred to Dubai bank, court told 17:56
Traumatised woman must remain a ward of court 17:47
Young homeless mother may have been dead in tent for a number of days 17:41