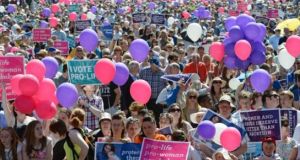 A section of the crowdat an anti-abortion Vigil for Life at Merrion Square, Dublin, in June. Photograph: Eric Luke/The Irish Times

The deputy chairwoman of the Pro Life Campaign has said the biggest challenge facing the movement in Ireland is the “extremely biased” media.

She said one of the hallmarks of a healthy democracy is the existence of an independent and courageous media.

“We hear only stories that promote abortion and never the ones that tell the truth,” she said.

“Even in the recent case of Ms Y, there was a strange reluctance on the part of the media to do any talking about the second human being involved: the baby. Talking about abortion is a little bit ickier when the Government’s brave new law has resulted in a vulnerable baby clinging to life in a Dublin hospital.

“Where were our fearless journalistic investigators then? Did they seek out the Minister for Health or demand the Taoiseach come forward to explain how he allowed this to happen? Or did they neatly sidestep it and try to airbrush the baby out of the equation and then continue to try to push more abortion.”

Julia Holcomb, former girlfriend of Aerosmith front man Stephan Tyler, spoke about her late-term abortion in the 1970s and how she came to regret it.

She said abortion had a devastating effect on her life, and she only started speaking publicly after Tyler wrote about it in his memoir. Now she is an anti-abortion activist.

“Looking at Ireland from the perspective of a pro life activist in the United States, it makes me very sad to see Ireland pressured by moneyed interests coming in and trying to push abortion on your nation.

“Abortion is something that victimises women and children. Ireland has a lovely history of being a guardian of both the mother and the child— respecting both lives. And I feel like that is an example we should look to from outside of Ireland rather than Ireland following our example,” Ms Holcomb said.

Roger Kiska of the Alliance Defending Freedom, a conservative Christian nonprofit organisation, spoke about his experience working on over 30 cases at the European Court of Human Rights (ECHR).

He said the people of Ireland were “misled” by the current Government to implement the Protection of Life During Pregnancy Act after the ECHR judgment in the ABC case. He said no such action was required as a result of the judgment in the case taken by three women who had travelled abroad for abortions and argued that Ireland’s laws jeopardised their health and wellbeing.

Members of Pro Life Campaign said they hoped to have what they called the “life ending, not life saving” law repealed.