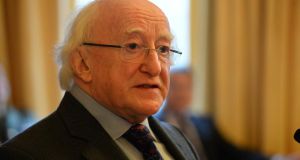 President Michael D Higgins has signed the result of last May’s marriage referendum into the Constitution.

The Thirty-Fourth Amendment of the Constitution (Marriage Equality) Bill 2015 was signed by the president at Áras an Uachtaráin.

The president’s signature amends the Constitution so that: “Marriage may be contracted in accordance with law by two persons without distinction as to their sex.”

Minister for Justice and Equality Frances Fitzgerald welcomed the signature.

A spokesman for the Minister said that the Government will now bring forward the Marriage Bill 2015, which will make the necessary changes in existing statute law to give effect to the new Constitutional provision.

T his Bill will be introduced in Dáil Éireann in September.

Glen, the Gay and Lesbian Equality Network, also welcomed the move. Chairman Kieran Rose said it was a “ historic moment for LGBT people and everyone in Ireland”.

“After the joyful scenes that followed the resounding Yes vote last May, it is wonderful that President Higgins has signed the act and made the result official.”

“We look forward to the Oireachtas passing the necessary enabling legislation to allow the first civil marriages for lesbian and gay people to take place as soon as it returns.

“As a nation, all of us can now look forward to the civil marriages that so many lesbian and gay people, their family members and friends have long awaited.”

Irish Council for Civil Liberties (ICCL) executive director Mark Kelly said the President’s decision to sign the amendment into law on Saturday was a vindication of “the clearly expressed wish of more than 1.2 million voters to live in a more equal Ireland”.

“The ICCL warmly welcomes the fact that, following the recent dismissal by the Court of Appeal of spurious legal challenges to the landslide referendum result, marriage equality shall at last be the law of the land.”

Two men have sought leave to appeal the outcome of the marriage referendum to the Supreme Court, after their previous court challenges to the result were rejected.

The Supreme Court office on Thursday received two applications for leave to appeal in the cases, the Courts Service confirmed.

At the end of July, the three-judge Court of Appeal dismissed separate applications by the two men for leave to bring petitions challenging the result of the referendum.

It rejected arguments by Gerry Walshe, of Lisdeen, Co Clare, that he had established the necessary grounds to bring a petition.

The court also found Maurice J Lyons, of Callan, Co Kilkenny, had no basis entitling him to bring a petition.

They have seven days in which to lodge their papers with the Supreme Court, after which the State will respond.