Support group says children are being damaged by high-conflict separations 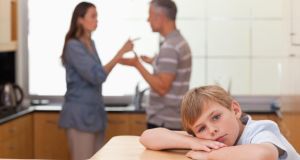 The Parental Alienation Awareness Association said there was a lack of understanding in Ireland of how serious this form of alienation can be and how much damage can be caused to children as a result. Photograph: Thinkstock/Getty Images

A parent who, following the breakdown of a relationship, attempts to turn their child or children against the other parent should be prosecuted, a support group has said.

The Parental Alienation Awareness Association said there was a lack of understanding in Ireland of how serious this form of alienation can be and how much damage can be caused to children as a result.

Parental alienation involves the unwarranted rejection of one, previously loved, parent by a child following a separation or divorce. It is associated with high-conflict splits and involves the child focusing undeserved and disproportionate anger toward the rejected parent, which is fed by the behaviour of the aligned parent, who most often has greater custody.

Some psychiatrists and support groups have labelled the child’s behaviour as “parental alienation syndrome” (PAS), though this is not defined as a condition by the World Health Organisation. It is also not recognised by the American Psychiatric Association’s Diagnostic and Statistical Manual of Mental Disorders, the bible for mental health diagnoses.

However, family therapist Brian O’Sullivan says, whatever the label is, the dynamics of PAS have been noted since the 1950s and children are being damaged.

The issues underlining this are complex, but may be partially explained by the alienating behaviours of the aligned parent, who may be emotionally needy and who offers the child warm and involved care in exchange for allegiance.

Mr O’Sullivan, who is completing a thesis on alienation at the department of child and family psychiatry in the Mater hospital, Dublin, said the child’s reasons for rejecting a parent may be scripted, lack substance and accurate detail, and may include adult phrases and language.

“This is not to be confused with realistic estrangement, where there has been neglect or abuse and a child has good reasons to be hostile to a parent,” he said.

Alienation can cause long-term psychological damage to children, as well as damaging the relationship with the alienated parent. It can also impact both parents, not just fathers, he said.

In Ireland, it is a relatively new phenomenon, because we have only had divorce since 1995, Mr O’Sullivan said.

He said in family court cases here, where the voice of the child is now being given such emphasis, it would be helpful if social workers, therapists, legal professionals and judges were aware of the dynamic.

“There needs to be more education about it,” he said.

The Parental Alienation Awareness Association has called for legislation to make parental alienation a criminal offence. Andries van Tonder, secretary of the organisation, said in Mexico, the parent encouraging alienation can be imprisoned for 15 years. He said there should also be State support and rehabilitation provided for PAS children.

“It is a serious form of child abuse to turn a child against a parent,” he said.

“The problem is it is so embedded in Ireland.”

He said the after-effects of parental alienation can be worse than physical or sexual abuse and have been linked to suicides and drug overdoses in Ireland.

“A PAS child may not realise the damage that has occurred and may only pick up on the effects aged 24 or 25,” he said. He said he was aware of a 69-year-old, who was a PAS child, and was still suffering from the effects. The association has quite a few adult PAS children who are members, he says, as well as parents who have been alienated.

“Our big fight is to educate on this form of child abuse; Ireland does not want to listen yet, but we hope it will listen soon.”