Total of 412 same-sex marriages registered since May 2015 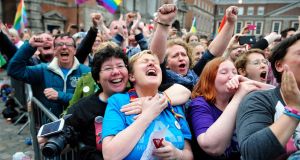 A total of 412 same-sex couples across the State have married since 1.2 million Irish people voted in favour of same-sex marriage a year ago.

This weekend exactly one year ago, on May 22nd 2015, Ireland became the first country in the world to introduce same-sex marriage by popular vote with 62 per cent voting in its favour.

Statistics released by the Department of Social Protection ahead of the anniversary of the referendum show that 412 same-sex marriages have been registered in the past year.

The vast majority of these ceremonies took place in the capital with 213 marriages registered in Co Dublin over the past year. There were 43 same-sex marriages in Co Cork, followed by 25 in Co Limerick, 17 in Co Wicklow and 14 in Co Galway.

The lowest number of registered same-sex marriages took place in Carlow, Leitrim and Monaghan with only one marriage in each county.

There were no same-sex marriages registered in Co Clare last year.

Minister for Social Protection Leo Varadkar welcomed the high figures of same-sex couples who had chosen to get married over the last year and described the referendum as “a historic day for Ireland”.

“One year on, it’s really great to see that 412 marriages have now taken place which otherwise would not have happened,” said Mr Varadkar. “It’s a timely reminder of that momentous vote on that momentous day.”

There were also a total of 966 same-sex marraige notifications recevied over the past 12 months. The highest number came from Dublin with 475 notifications, followed by 86 notifications in Cork and 50 in Limerick.

The Marriage Act 2015 came into effect in November 2015, six months after the referendum took place. The signing of the order gave effect to the referendum which approved marriage being available to same-sex couples.

While homosexual couples intending to marry must give three months’ notice – in the same way as opposite-sex couples must – a fast-track civil partnership provision applies under the Marriage Bill 2015.

According data released by the Central Statistics Office in April, there were 376 civil partnerships last year, 250 male and 126 female. Over three quarters of these (294) were of couples living in Leinster, with over half (248) living in Dublin. There were no civil partnerships in Carlow, North Tipperary, Leitrim, Roscommon, Cavan or Monaghan

In total, 1,201,607 people voted in favour of same-sex marriage last year with 734,300 against, giving a majority of 467,307. Roscommon-South Leitrim was the only constituency to reject the amendment.

The resounding Yes vote resulted in a new sentence being added to Article 41 of the Constitution. It reads: “Marriage may be contracted in accordance with law by two persons without distinction as to their sex.”