Nuns did not believe girl was sexually abused 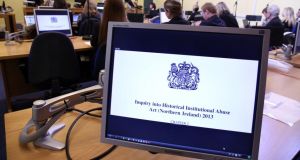 A witness to the inquiry investigating historical institutional abuse in Northern Ireland has recounted how nuns refused to believe her when she told them of how she was sexually abused when she was a young girl.

The 58-year-old woman also told the inquiry today how for almost 50 years she has been trying to locate her older sister who was with her in the Sisters of Nazareth home in Derry.

The witness - who was in Nazareth House residential home from 1957 to 1969 - described a “cruel” regime where she suffered a number of beatings from individual nuns. Her most serious allegations were of two occasions when she spent time on placement on two farms when she was about 11 or 12 years of age, the inquiry in Banbridge, Co Down heard.

She recalled an occasion on the first farm where she was driving a tractor when another girl on board the vehicle from Nazareth House almost fell off. She said that in the aftermath of that incident a man abused her by touching her private parts. That abuse stopped when another man intervened and told him to stop.

The witness said the man who abused her went on to sexually abuse her a “few” more times on the farm. She remembered an incident when that man got into the bed between her and the other girl but the man’s wife came in and told him to “get out”.

She described the incident on the second farm when the owner tried to abuse her. On that occasion she ran away. “I got to hell out of there,” she said.

The witness said when she complained to the nuns they did not believe her and told her not to be talking “nonsense”.

The witness also told how she learned that a girl in Nazareth Home who was six years older than her actually was her sister. When she left the home aged about 16, she visited the witness about three times but then the visits stopped.

The witness described how for years she has been unsuccessfully attempting to trace her sister. She said her parents may have brought her (the witness) to Nazareth House but she wasn’t sure. She never met her parents in later life.

During the course of her search for her sister she discovered she had a brother and two other sisters who were not put into care but were instead minded by her grandmother. She now had a relationship with her siblings and their families.

The witness said there was one “cruel” nun who often beat her and the other girls. She described one occasion when she struck her with a “black belt she wore around her waist” and another when she was “whacking” her with a stick. She was “black and a blue”. A PE teacher at the school she attended noticed this and asked her did she want to talk about it. She said no because she “would be killed” if I do.

On another occasion, she was punished for smoking. One nun grabbed her, pushed her into the music room and “banged me off the piano stool” and also struck her on the back. The witness figured that the nun enjoyed seeing her cry so she didn’t cry, with the result that the nun stopped beating her, saying: “There is no point in hitting you.”

The woman also said that during meal times in Nazareth House that if she put her elbows on the table, a nun would come and hit her with a “thin red stick”.

She said 100 girls “would queue up for two baths”. There was “no privacy” and the “water was never changed”.

She said the girls had to sleep with their arms crossed. If a nun discovered her sleeping in any other position she would be woken up and told to fold her arms. This made her sore. “I was in pain,” she said.

She said she was never told about puberty and when she had her first period she thought she had done something wrong. One of the older girls explained it to her.

She said two nuns had been kind but there were others who were cruel. “I could have done better with my life...they ruined my life,” she said.

The woman, who is married with five children, said she wanted an apology from the nuns and she also didn’t “want anyone else to go through what I went through”.