Most vulnerable to poverty are lone parents and their children, according to Unite trade union document 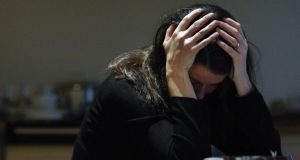 More than 60 per cent of lone parents in Ireland are at risk of poverty compared to an EU average of 50 per cent, according to Unite. Photograph: David Cheskin/PA Wire

In a policy document published this morning entitled Poverty is a Feminist Issue , the union says the recession and spending cuts have disproportionately affected women in the Republic and Northern Ireland and they are calling on trade unionists to fight gender discriminatory policies at statutory and corporate levels.

The document is published as the Congress women’s conference gets under way in Wexford this morning, under the agenda Organising Women for Decent Work .

The union points out that the Central Statistics Office defines deprivation as the experience of being without at least two of 11 indicators, including a substantial meal twice a week, waterproof shoes and a warm coat. “The number of women experiencing deprivation had nearly doubled between 2008 and 2011, that last year for which we have data. More women than men suffer deprivation.”

Lone parents
Among those most vulnerable to poverty are lone parents, and their children. The vast majority are women.

“Over 60 per cent of lone parents in Ireland – both in the Republic and Northern Ireland – are at risk of poverty. This compares to an EU average of 50 per cent,” says the document.

“Lone parents in northern Europe – Sweden and Denmark – do not experience the same levels of poverty-risk owing to their strong social protection infrastructure.”

Women are also disproportionately affected by low pay, being dominant in part-time and contract work, and in such lower-paid sectors as cleaning, child-minding and retail.