More than 660 children died in Dublin home in seven years 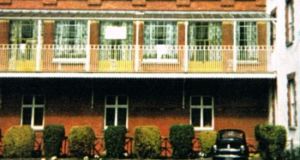 Pelletstown, on the Navan Road in Dublin: departmental reports acknowledge a “deplorable loss of life” in 1925 and 1926. Photograph: Adoption Rights Alliance

More than 660 infants and children died in Pelletstown mother and baby home in Dublin during a seven-year period up to the end of March 1930, State records show.

The reports also contain figures compiled by the Registrar General that show the mortality rate among “illegitimate” infants in 1925 and 1926 was five times that of infants born within marriage, something the departmental reports acknowledge as a “deplorable loss of life”.

Department of Local Government and Public Health reports show there were 662 deaths in the institution on the Navan Road between April 1st, 1923 and March 31st, 1930.

Mother and baby homes were established in Ireland in the 1920s and 1930s to house unmarried mothers and their children.

Some 119 of the 240 children housed in Pelletstown died in 1925, with the high mortality rate attributed to a measles epidemic. Of the 263 children in the institution in 1927, 111 died. No overall factor was given for these deaths.

The institution was run by the Sisters of Charity of St Vincent de Paul but was “provided and administered by Poor Law authorities”. It closed in 1985.

The figures are contained in Local Government and Public Health reports, which are accessible at the National Library of Ireland. In addition to Pelletstown, they contain information on a number of other homes that housed unmarried mothers and their children. During the nine years up to March 31st 1941, there were 419 infant and child deaths recorded in Sean Ross Abbey in Roscrea, Co Tipperary, and 238 in the Sacred Heart Home in Bessborough in Cork.

Figures indicate that there were 69 deaths at the Manor House home in Castlepollard, Co Westmeath, between the date it opened in 1935 and March 31st, 1940.

All three institutions were run by the Sisters of the Sacred Heart of Jesus and Mary.

The total number of deaths in the four homes covered by the reports was 1,483.

The reports also contain limited information on the Children’s Home in Tuam, which was also maintained by poor law authorities and run by the Sisters of Bon Secours.

Separate figures from the General Register Office show 796 infant and child deaths were recorded in the Tuam home in a 36-year period between 1925 and 1960.

The Tuam deaths have been the focus of controversy and national and international media attention since they were brought to public attention by Galway historian Catherine Corless.

The Government responded to the revelations by announcing a commission of investigation into mother and baby homes earlier this month.